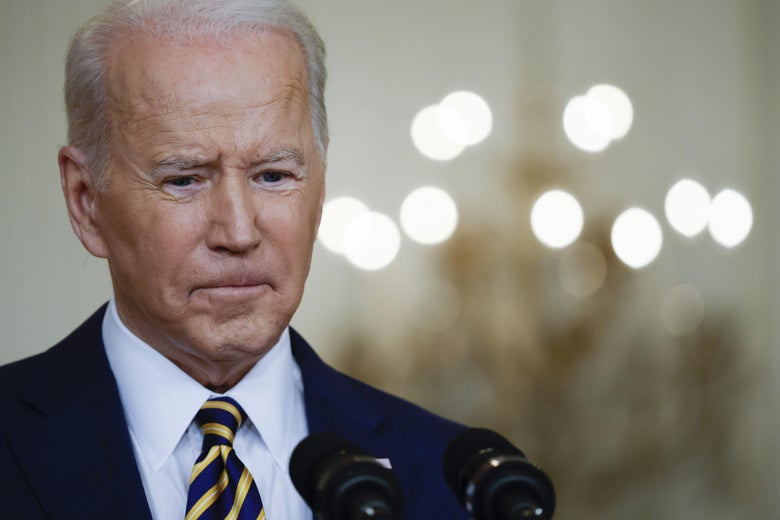 A year later, is he responsible for the current crisis?

At a Wednesday press conference marking his first year in office, President Joe Biden was unmistakably defensive about his administration’s COVID response. He said the United States was clearly in a “better place” than a year ago. But are we? Right now, the country is averaging 800,000 new COVID cases a day, three times more than last January, and hospitalizations are higher than they have ever been.

Biden came into office assuring the American public that, unlike Donald Trump, he had a plan that would defeat the pandemic. On Thursday’s episode of What Next, I spoke to the Washington Post health reporter Dan Diamond on where this plan succeeded and failed and how much blame to blame on the current administration. This conversation has been condensed and edited for clarity.

Mary Harris: You said that if you look closely at this plan, you can see places where the administration may have achieved a goal, but barely, and needed to push harder. I know you spoke to a group of experts on the diet. What did they say when you asked if the administration’s plan was working or did the administration even follow the plan?

Dan Diamond: When I was first talking to experts, I would specifically walk through the plan with them and say, is this something you would give them a pass on? Would you fail the White House here, or would you say it’s partially achieved on ideas like masking, like testing? And the White House promised at some point in that plan that it was going to do, quote, “predictable and robust” federal purchases of tests – essentially, the government was just going to buy as many tests as possible in a predictable way, so if you were a test maker, you knew you had guaranteed customers.

You are essentially creating a market.

Exactly. This does not happen. …

A more complicated example is on the global side, where admin has stepped in, and you can iterate through the list and check, check, check. They joined the World Health Organization. They joined this vaccine sharing alliance. They tried to restore global luster and leadership after President Trump withdrew from the world stage. I mean, you could say they’ve done it all, but at the same time, the global crisis is still pretty bad. So the question of whether they did what was necessary to make enough progress on the global front – I think the answer, and I got it from federal officials, is no. Much more needs to be done in 2022 and beyond to ensure that variants do not appear overseas and return, not to mention all the people who suffer from COVID infections and collateral damage that could really use the help of the richest and most powerful nation in history.

Experts also talked about healthcare workers. And of course, we are now seeing hospitals overwhelmed by omicron. So what was in this plan that could possibly have prevented this?

The White House said a year ago, as it measured where the United States was in January 2021, it said the hospitals were full, we need to come up with a plan to make sure this doesn’t happen again . Unfortunately, the hospitals are full again, the workers are all the more exhausted. But the plan was to increase support for hospitals that would need it, so crisis teams, which we’ve seen done at the White House.

Another plan was to simply recruit more field workers to avoid shortages. Some of this work has begun, but it’s a long process. You can’t make a nurse overnight. Maybe we will be ready in three years with more health workers, but we kind of need them now. So the problem is kind of that midpoint: could there have been more to keep people in the field? And I spoke to an expert, David Grabowski, this leading expert in long-term care at Harvard University, who has been claiming for two years that some nursing home workers could have benefited from a salary increase of $5 an hour than federal government funded, if you’re trying to keep people in some of the most sensitive workplaces.

And then there is the second element, even beyond the issue of scarcity, of the problem of security. There are workers who have been exposed to COVID, whether in hospitals and nursing homes, packing plants, wherever they are, they have been arguing for two years that there needs to be more standards of workplace safety that hold employers accountable. The Biden administration came in promising to explore that idea, maybe even push it, but didn’t make any meaningful headway, and I’ve spoken to frontline workers who are really discouraged about it, people who supported President Biden as a candidate but say he is not following as president.

I imagine when you brought those criticisms to the Biden administration, maybe they didn’t really think it was their fault. I was struck by a quote from Andy Slavitt, who worked very early in administration: “It’s a good plan overtaken by events.” And I was wondering what you thought about it.

You know, Andy was pretty honest. I think he celebrated where he thought the plan had worked well. The Biden administration and people like Andy who worked there can rightly point to the vaccination campaign. And even if the vaccination rate in the United States lags behind other countries, it is not for lack of trying by the Biden administration.

I think where Andy and others recognized a challenge was the evolution of the virus. This delta has become more transmissible. This omicron, not only more transmissible, but dodging all the vaccines that the Biden administration had tried to put under arms.

“One of the reasons the White House has embraced this idea of ​​Republican disinformation or resistance is that it’s a bit of a jailbreak. card.”

But didn’t we know the virus was going to evolve?

I mean, I don’t agree with the defense, but I think the Biden administration points to this as an argument for why they were celebrating this summer that the virus was more and more in the rearview mirror, as it turned out that was not the case. There are a lot of people who said we need to be ready for the next variant.

Many managers you spoke with seemed to see misinformation as a major roadblock for them. And that hasn’t really followed for me, because there are also things that they just haven’t done until literally this week, like allowing Americans to order free home COVID tests.

So when it comes to misinformation, Gayle Smith, who led the State Department’s COVID response globally, told her that misinformation was like a second virus that they were trying to contain. When you looked at all the people passing on vaccines or not taking the precautions they should, the Biden administration might take action to try to protect people, but if people refuse to listen, then that’s a challenge that is ever-present and a real problem.

As people lined up to get COVID tests in December and January, and infection rates skyrocketed, I think there was this palpable sense that something has to change in terms of the response from administration. And you can see it in the fact that all of a sudden the administration is rolling out COVID testing for every American. I’m wondering if you think changing the administration’s response means changing that plan you’ve been evaluating, or whether it’s pulling different levers with different degrees of pressure.

I asked myself the question and I asked the question directly to the White House. When I was interviewing Jeff Zients, the White House coronavirus coordinator, and his deputy principal, Natalie Quillian, the idea of ​​new strategies came up, and I jumped on it and said, does that mean- it you’re going to have a new strategy for year two? And immediately they said no, we’re sticking with what worked the first year, we think that’s the right plan, we’re just going to keep doing more.

I don’t know if that’s the right answer or not. There are a lot of things in this plan that seemed to work. Again, the vaccination component generally worked. We haven’t really talked about health equity, but the administration can point to quite a few statistics where it looks like they’ve filled in some of the racial and ethnic gaps in poor COVID outcomes. So there are ideas that are proven and accepted by public health experts across the aisle. It comes back to this issue of execution and political will. For some reason the White House backed off on some of this stuff in the middle, at the end of last year. I think they really thought they had gotten to a point where the vaccination campaign was going to get us through.

Kamala Harris gave an interview and was faced with, you know, do we need to change course when it comes to coronavirus? And his answer was so odd, but definitely in the sense of what you’re referring to. It was a bit of a salad of words: “It’s time for us to do what we’ve been doing, and that time is every day. Every day it’s time for us to agree that there are things and tools that are available to us to slow this thing down. It was like a resistance to recognizing that the battlefield has changed.

I think because this is a political administration that, like any White House, is concerned about its political viability, concerned about approval ratings, it’s very, very difficult to run away from a plan, even s seems not to work. It is an admission of failure which will then be thrown back at them.

Get more news from Mary Harris every weekday.