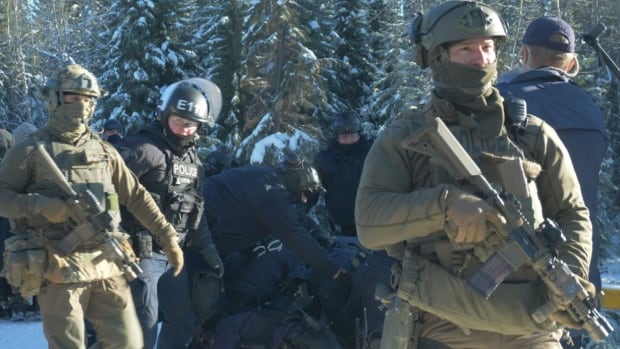 Press freedom advocates call for the release of photojournalist Amber Bracken and documentary filmmaker Michael Toledano, who were arrested Friday at a resistance camp established by opponents of the Coastal GasLink pipeline at a construction site west of Prince George , in British Columbia.

RCMP confirmed on Sunday that the couple were still in custody, awaiting a Monday morning court date, along with 13 other people who were arrested on Friday.

The RCMP admitted that Bracken and Toledano identified themselves as independent journalists.

On Sunday, the Committee to Protect Journalists, a US-based organization that promotes press freedom around the world, issued a statement calling for the release from Bracken and Toledano. The Canadian Association of Journalists (ACJ) intervened on Saturday, demanding their release as well as their personal effects and images.

Peter Jacobsen of the Canadian Journalists for Free Expression said the courts have been “very clear … that journalists are not subject to injunctions.”

Bracken, a photojournalist working for the Narwal, won a CAJ award for her work in 2020 covering the Wet’suwet’en dispute with Coastal GasLink. Toledano is a freelance filmmaker who has been working on a documentary about conflict and resistance at Coastal GasLink since 2019.

Journalists’ rights protected by the charter

On Sunday, two federal cabinet ministers expressed concern over the arrests. In a Twitter thread, Public Safety Minister Marco Mendocino said journalists play a vital role in Canadian democracy. “To fulfill this role, journalists must be able to work free from threats, intimidation or arbitrary actions by the state.

Crown-Indigenous Relations Minister Marc Miller also weighed in on Twitter, writing: “Journalists have the right to cover current events in this country.

“This right is essential to our democracy. They should not be detained or detained longer than necessary to verify that they are journalists.”

Journalists have the right to cover the news in this country. This right is essential to our democracy. They should not be detained or detained longer than necessary to verify that they are journalists. #cdnpoli https://t.co/8rAaVi8FSh

Journalists’ rights are guaranteed by the Canadian Charter of Rights and Freedoms, but Jolly says the CAJ, along with a coalition of media, had to sue the RCMP change the injunction to blockade Fairy Creek on Vancouver Island to ensure access to journalists.

On October 8, British Columbia Supreme Court Justice Douglas Thompson ruled in their favor, stating that the RCMP exclusion zones at Fairy Creek had “seriously and substantially affected important freedoms in the injunction zone, including the ability of individuals to move freely, and freedoms of assembly and expression,” including freedom of the press ”.

Members of the Wet’suwet’en established a resistance camp at a Coastal GasLink work site on September 25, ending plans to drill a tunnel under the Wedzin Kwa, or Morice River.

On November 14, the group informed Coastal GasLink that they would implement an eviction notice issued on January 4, 2020 by the hereditary chiefs of the five clans of the Wet’suwet’en Nation.

Police said that upon arriving at the resistance camp on Friday, they read a copy of an injunction notice from the British Columbia Supreme Court allowing construction of the pipeline to proceed and warned those in the area. inside to leave several times, before forcibly entering and making arrests.

A total of 29 people have been arrested so far along the Morice River Forest Service Road south of Houston in the northern interior of British Columbia.

The Coastal GasLink pipeline, if completed, will stretch 670 kilometers across northern British Columbia, carrying natural gas from near Dawson Creek in the east to Kitimat on the Pacific Ocean. The company has signed benefit agreements with 20 band councils along the project route. But Wet’suwet’en hereditary rulers say band councils have no authority over lands beyond reserve boundaries.