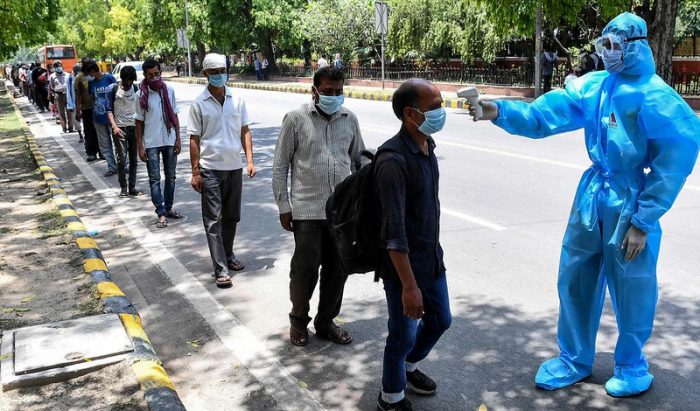 The world watches in horror as Covid-19 overwhelms hospitals in India. It’s hard to look away when images of open-air crematoriums and makeshift funeral pyres in the nation’s capital’s public parks flicker on our screens.

It’s hard to overstate the enormity of the public health calamity unfolding in India as the nation of 1.4 billion people fights what appears to be a losing battle against the virus. But should it be so?

Answering that question is the responsibility of the free press in the world’s largest democracy. They have the unenviable task of writing the first draft of this miserable chapter in the nation’s history. They shoulder the burden of speaking truth to power – recording the tales of colossal missteps like failing to prepare for a second wave, exposing political hubris in allowing massive campaign rallies and the criminal negligence that has led to severe shortages essential hospital supplies such as oxygen.

A small group of independent media are doing their best to capture the nation’s descent into Covid hell, but they are too few and too weak to confront the forces trying to crush dissent. You won’t find the urgent, hard-hitting stories in the country’s mainstream media. Since the re-election of a public image-conscious Bharatiya Janata party in 2019, press freedom has been steadily eroded. The democratically elected government, which has failed to protect its citizens, has tried to muzzle journalists who denounce its incompetence.

The arrest and detention of journalist Siddique Kappan is an extreme example. Kappan was on his way to Uttar Pradesh to report on the gang rape and murder of a 19-year-old Dalit woman whose body was hastily buried by local police. He was arrested under the Unlawful Activities (Prevention) Act and has been held without bail since October 2020.

It’s not just the government, however; there is also the issue of media ownership. India’s biggest media outlets are owned by the country’s wealthiest industrialists, who take great care not to antagonize a government that has the power to trigger politically motivated scrutiny of their non-media businesses. Then there is the self-censorship of mainstream media that relies on government and political ads, especially after the pandemic decimated corporate advertising.

Last week, as Covid-19 wreaked havoc across the country, the latest Reporters Without Borders World Press Freedom Index was released. India was at 142, out of 180 nations.

The non-profit organization called India “one of the most dangerous countries in the world for journalists”. At least four Indian journalists have been killed in the course of their work in 2020. Equally alarming, according to the group, is the fact that journalists are “exposed to all kinds of attacks, including police violence against journalists, ambushes by political activists and reprisals by criminal groups or corrupt local officials.

Who is responsible for this climate of fear? “Since the spring 2019 general elections, won overwhelmingly by Prime Minister Narendra Modi’s Bharatiya Janata Party, pressure has mounted on the media to toe the line of the Hindu nationalist government,” the journalists wrote. researchers behind the Freedom of the Press Index. Under Modi, police in several states, especially those ruled by the BJP or its allies, have brought criminal charges against journalists for writing articles critical of the government or its political leaders. Often these cases drag on for months or even years under the guise of “investigation” and serve as a warning to other journalists.

Modi, who works hard to cultivate India’s image as an emerging global power, did not like that India ranked so low on the press freedom index. He set up a group of experts to identify ways to improve India’s position. He even sent India’s ambassador to France to put pressure on Reporters Without Borders to improve the ranking. After a year and a few meetings, the panel of experts concluded that the real problem was not the state of press freedom in India, but “Western bias”.

At least one member of the panel, prominent journalist P Sainath, disagreed with this assessment and said so in a dissenting note.

So if Modi wants to change the image of India, what should he do?

Certainly not to send diplomats after foreign newspapers for blaming the current Covid situation in India straight to Modi’s doorstep.

Instead of engaging in a “three-pronged communications strategy to actively change the country’s public image”, as the panel recommended, Sainath suggested the government start by acknowledging the grave freedom crisis. of expression in the country, and the “state of emergency” facing journalists.

Better yet, Sainath proposed, the government can support journalists by dropping lawsuits against them across the country. According to the Asia-Pacific director of Reporters Without Borders, Daniel Bastard, this could even lead to a better ranking in the press freedom index.

“Over the past few years, the number of [cases] filed against journalists by members of the BJP or the BJP-led regional and local government has increased sharply, amounting to intimidation and harassment,” Bastard said. “Reversing this trend would help improve India’s score in the index.”

And if Modi is serious about improving press freedom in India, he can create laws that hold police accountable for filing false charges against journalists for doing their jobs. In fact, Sainath has a whole list of recommendations to the government to help journalists do their job without fear of reprisal. But that’s all Modi and his administration need to consider. What can the rest of the world do?

A good starting point would be to support pockets of independent media in India. The mainstream media may not be willing or able to do their job, but a few small but independent newsrooms in India are doing their best to speak truth to power and keep citizens informed as the virus continues its march. Across the country. Journalists from relatively new digital startups like The Wire, The Print, Scroll.in, The News Minute, Article 14 and Alt News are at the forefront of resistance against India’s slide into authoritarianism under Modi.

It’s not just the media that are in danger in India. The very foundations of democracy are in jeopardy, according to political scientists at the V-Dem Institute in Sweden. “India is on the verge of losing its status as a democracy due to the severe shrinking of space for media, civil society and the opposition under Prime Minister Modi’s government,” the group’s latest report warned. on the state of democracies in the world.

In India, the ability of the media to seek out the truth and speak it without fear is a matter of life and death. A government that allows massive political rallies attended by hundreds of thousands and encourages a religious holiday attended by a million people in the midst of a global pandemic must answer for preventable deaths. With the second wave, nearly 3,000 Indians are dying every day, some outside hospitals, some at home and some on the streets. Let a free press shed some light on this.

Lisa Joseph is editor of The GroundTruth Project, which hosts Report for America and Report for the World, in partnership with Scroll.in. He has worked as a reporter and editor at major Indian newsrooms, including The Times of India, The Economic Times and Mint, and served as editor of the Dallas Morning News and the Philadelphia Inquirer.