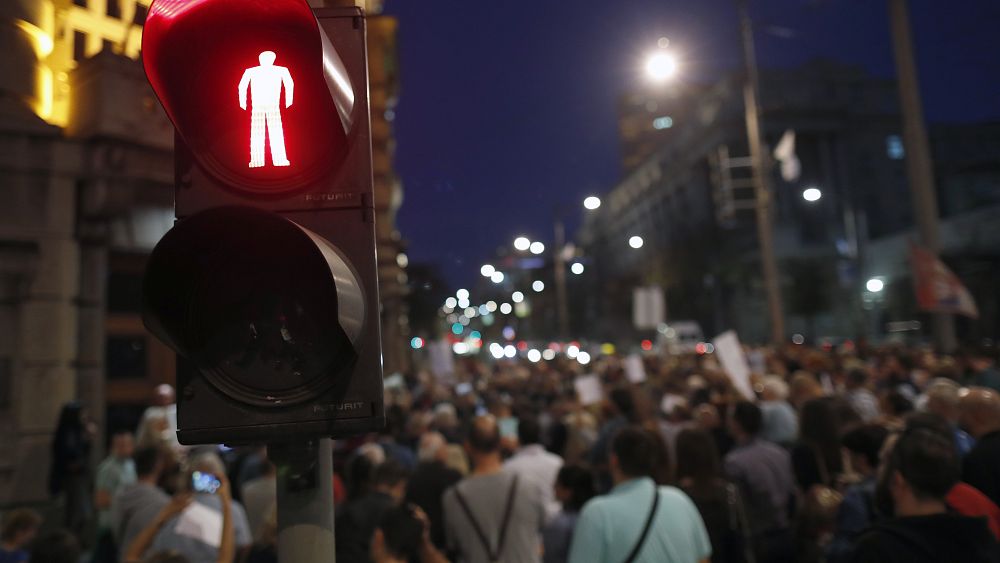 A video was quickly released on social media describing Georgiev as a “foreign mercenary” and a “traitor” with a soundtrack of sirens heard across Serbia during the 1999 NATO bombing campaign. have multiplied since. For the past two months he has been accused of being a Bulgarian spy because his surname is said to be Bulgarian.

“When you say in Serbia that someone is Bulgarian, it’s a very bad thing. Now they call me ‘the Bulgarian guy’ in public, people from the ruling party. Every time I post something on Twitter, these bot squads come in like flies and bombard my account with comments, ‘Hey Bulgarian, how’s Bulgaria?'” Georgiev said.

Georgiev has worked as a journalist in Serbia for more than 20 years, including 13 years as an editor and reporter for the award-winning investigative network BIRN. He now edits the evening news program on the independent cable channel Nova S and writes for the weekly news magazine Vreme.

Aleksander Vucić has been on the political scene in Serbia for more than 30 years, having served as Prime Minister, Deputy Prime Minister and Defense Minister. In April, he won a second term as president. Georgiev fears that the health of the country’s media is unlikely to improve over the next five years.

“Aleksander Vucic is not Vladimir Putin. Vucic doesn’t have the power to stop us or kill us. Those are the only two things we haven’t had in the last ten years,” he said. he declares.

When Vučić was Minister of Information under Slobodan Milosevic in the 1990s, during the Yugoslav Wars, he introduced official censorship in Serbia under which critics of the war became enemies of the state.

“This language has come back in force in recent years under Vučić. They started to silence all free voices in Serbia.

Vučić came to power as leader of the Serbian Progressive Party [SNS] in the 2017 elections with an extraordinary majority, winning 98% of parliamentary seats, largely following an opposition boycott to protest harassment and intimidation by pro-government politicians.

In the absence of political opposition, civil society and the media were unwittingly pushed into the role which led to an escalation of harassment and intimidation of independent journalists.

“MPs talk about the opposition not in parliament because they constantly need to have an enemy to blame for failures or mistakes etc.,” Crnjanski said.

In 2021, the World Press Freedom Index rated media in Serbia as “partly free”, noting an increase in attacks on journalists and arbitrary arrests.

“A widespread culture of portraying independent media as a hostile force and not accepting the role of journalists as public watchdogs dates back to the 1990s, but has continued since the transition to democracy, with Serbia being still grappling with this element of its recent past,” MFRR said. mission report concluded in April 2021.

KRIK, an investigative journalism portal focused on crime and corruption, has been a particular target of government hostility. Since its launch in 2015, it has revealed multiple links between government ministers and criminal groups, even publishing photographs of Vučić’s son with a young member of a notorious criminal network on four occasions.

The 15-person team – made up mostly of women and all under the age of 40 – is regularly attacked on the front pages of pro-government tabloids. Jelena Vasić, one of the founders of KRIK, says public harassment inevitably follows.

“When the tabloids and pro-government television present us as media terrorists, as people who are against the president, when they present us as foreign mercenaries, as people paid by the CIA to destroy this country, after that our phone rings all day. Often it’s older citizens who believe the story, who believe the narrative that calls us to yell at each other to swear. It’s unpleasant to be in our shoes after the smear campaigns,” Vasić said.

Three of KRIK’s reporters, all women, had their homes broken into and ransacked.

“These weren’t thefts because nothing was stolen. Someone just walked into their apartment, turned everything upside down, and left. So it was intimidation, a message: we can come into your house, we know where you live,” Vasić said.

“We know this is bullying because none of these cases have been resolved so far.”

Only one in ten cases of threats or attacks against journalists have resulted in a court verdict, but convictions do occur. In 2021, a former mayor of Grocka was convicted along with two accomplices of arson at the home of journalist Milan Jovanović who had reported on local corruption.

Brankica Stanković, perhaps Serbia’s best-known and most respected investigative journalist, lived for more than a decade with 24-hour police protection because the threat to her life was seen as if severe.

“It’s a sensitive issue right now, so I don’t want to get into it, but I still have some protection,” she said.

She believes that the protection granted to her, and in particular not offered to other independent journalists, is partly the result of her reputation.

“If something happened to me, it would be a great shame for the state. There were theories that the state by giving me 24 hour protection, they actually wanted me arrested because I never gave up on the story. But if that was the intention, they failed,” Stanković said.

The European Commission and more recently the Biden administration have chastised the Serbian government for the decline of media freedom in the country. Vucić responded defensively to allegations of media repression in 2018 in an article for EUObserver, in which he presented himself as a victim of persecution.

“I am aware that I am an easy target for anyone who wants to attack Serbia because of the media situation, mainly because of my short participation in the government of Milosevic 20 years ago, but I urge everyone to use facts, not a mantra created as the only way to attack Serbia, which is progressing economically, whose reputation is growing in the world and trying to solve important regional problems,” wrote Vučić.

The president’s office did not respond to Euronews’ requests for comment on the state of media freedom in Serbia.

While critical journalists can be terrorists at home, on the international stage, Vučić is keen to pursue EU membership and embrace Western democratic values. In December 2020, the Serbian government set up two new working groups, one to develop a strategic action plan for the media, the other focused on the protection of journalists: a prerequisite for joining the the EU is free and independent media.

Brankica Stanković was allowed to fill this role. Last year, she launched Insajder TV, a cable news channel she owns with her longtime producer Miša Čvorović. Unique in Serbia, Insajder is an independent cable channel broadcast on the public provider Telekom and the private network SBB.

“It was long and difficult but all the arguments were on our side because they all knew what they were getting and it would be a shame if they all turned us down,” Stankovic said.

Does that mean they got the same level of access from the ruling party as the pro-government media?

According to data collected by the CRTA during this year’s election campaign, government officials appeared on the independent cable channels Insajder, N1 and Nova S only a handful of times. Meanwhile, in mainstream pro-government Serbian media, opposition voices have barely been heard. from January 1 to February 14, it had 90%.

“For us, the main problem is not the smear campaigns in the tabloids or the television stations controlled by people linked to the government. The biggest problem is that they sideline us and we are forced to appear biased,” said Slobodan Georgiev, explaining that ministries and government institutions simply refuse to grant interviews, briefings or even information to journalists that they consider critical.

“They don’t talk to me because they say, ‘You’re not a journalist; you work for someone who wants to destroy me politically”. So you wonder, is it really possible to have independent media in a society that doesn’t recognize it?