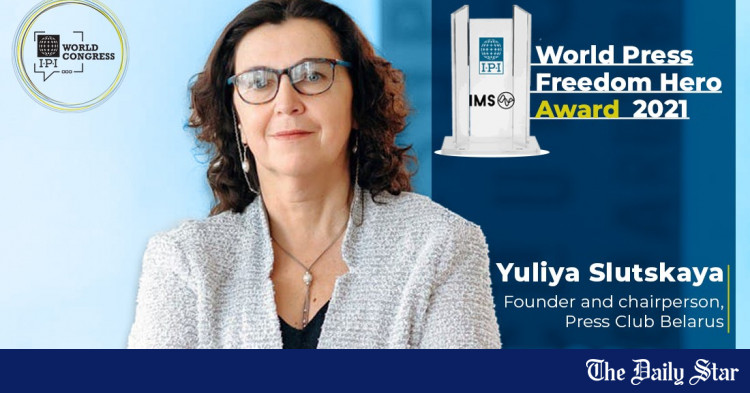 Slutskaya, the founder of Press Club Belarus, and several members of her team have been jailed on trumped-up tax evasion charges as part of Belarusian President Alexander Lukashenko’s regime’s crackdown on press freedom and freedom of speech. expression, according to the IPI website.

For all the latest news, follow the Daily Star’s Google News channel.

She and four colleagues were released after eight months in pretrial detention in August.

Today IPI and @forfreemedia We are honored to nominate Yuliya Slutskaya, President of Press Club Belarus, as our 2021 World Press Freedom Hero.

Yuliya is a beacon of independent journalism amid Belarus’ attacks on the press.

Following a crackdown resulting from the 2010 Belarusian presidential elections, she moved to Warsaw to found the Belarus in Focus Information Office, which provides expert analysis and commentary on social and political developments in Belarus.

In 2011 she created the Belarus Press Club while living in exile in Warsaw. After conditions in Belarus improved, Slutskaya was able to move Press Club operations to Minsk in late 2015.

“One of our main goals is to be a platform open to everyone. A meeting place where, in line with our mission, we aspire to facilitate communication and build trust,” Slutskaya said in 2019.

In 2020, a new wave of unrest and protests followed what was seen as a fraudulent re-election of Lukashenko, and it sparked a new wave of state terror against Belarusian dissidents and journalists, according to the website.

Nearly 500 journalists and media workers have been victims of state repression, 28 of whom remain behind bars to this day.

EU gives conditions to Taliban, including freedom of the press, to ensure interaction with Bloc