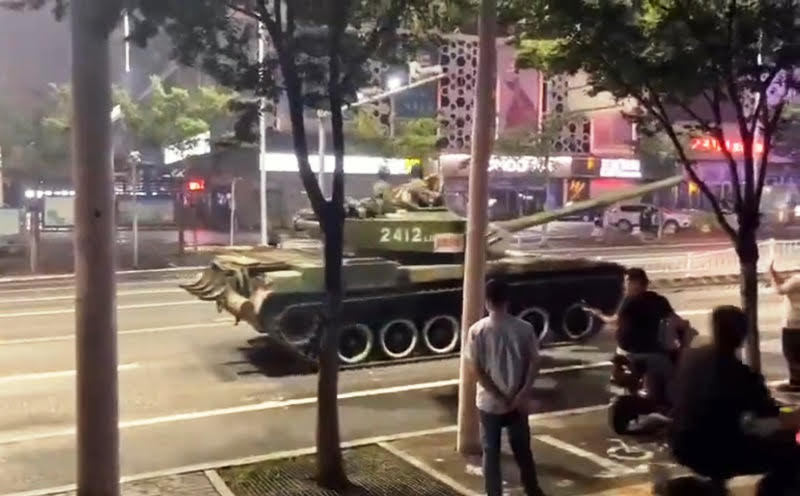 Zhengzhou, China: In a grim reminder of the horrific Tiananmen Square massacre, Chinese tanks were seen rolling through the streets of Henan to ‘protect’ banks amid large-scale protests as the country’s financial crisis gets worse.

According to local media, Chinese People’s Liberation Army (PLA) tanks are on the streets to protect banks (Rizhao, Shandong Province) as protests erupted in the province by bank depositors over the release of frozen funds.

Local media reported that the incident came as the Bank of China’s Henan branch said people’s savings in their branch were “investment products” and could not be withdrawn.

Despite promises that depositors in Chinese villages in Henan will get their frozen money back in batches, with the first due on July 15, only a handful of depositors have received the payments, raising a serious question as to whether banks have something to sell.

Tanks appeared on the streets of China’s Henan province, protecting banks from depositors. Money in citizens’ accounts is frozen on the pretext that it is now an “investment”

They had frozen 6 billion dollars#CHINA

Earlier on July 10, more than a thousand depositors gathered outside the Zhengzhou branch of the People’s Bank of China, the country’s central bank, to kick off their biggest protest yet.

According to the notice from the Financial Supervision Bureau of Henan Province, some bank depositors in villages and towns in Henan were supposed to get their deposits back on July 15, ANI reported.

Non-mainstream media believe that only a handful of depositors have made these payments, while Chinese state media has also published nothing about the refund.

During large-scale protests in Henan province by bank depositors over the release of frozen funds, men in white clothes, suspected of being members of the Chinese People’s Armed Police, suppressed protests outside the People’s Bank of Zhengzhou China (PBoC office), ANI reported citing local media.

Meanwhile, hundreds of applicants have staged several protests in Zhengzhou City, the provincial capital of Henan, but their demands are being ignored by Chinese authorities, according to reports.

What is the start time for the UFC 280 press conference?