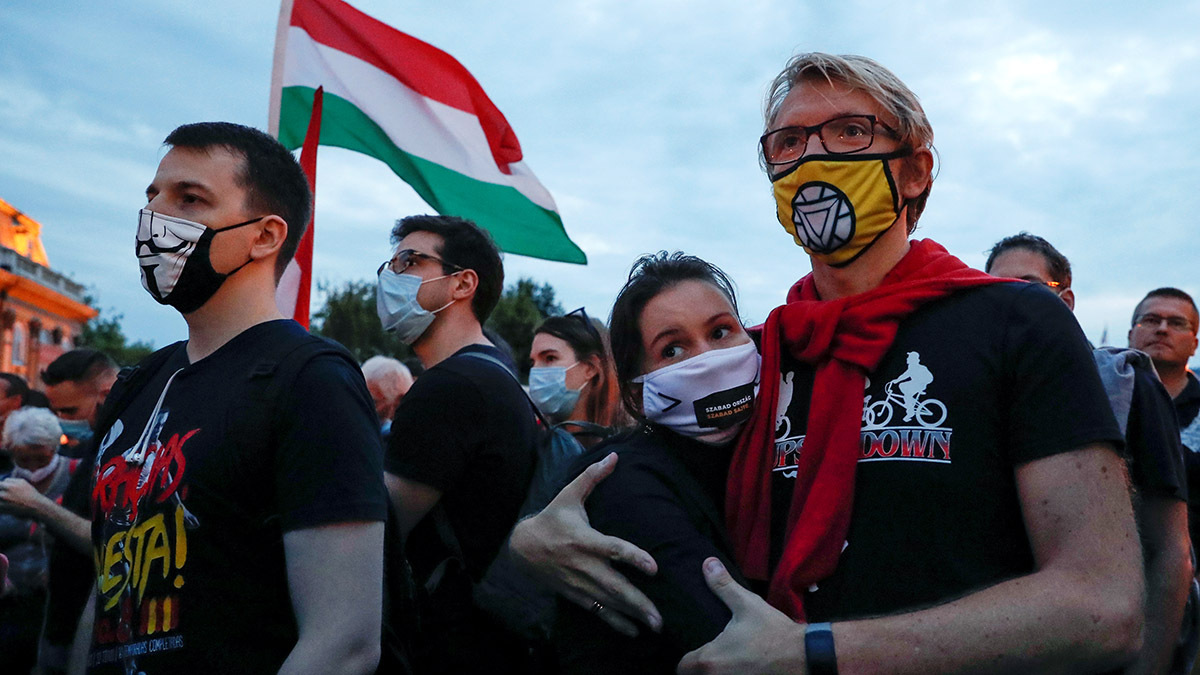 The government’s attempts to control the narrative of the COVID-19 pandemic and restrict the media under the guise of public health have created an information integrity crisis, watchdog groups say. The problem is particularly acute in Central and Eastern Europe, where press freedoms are shrinking as authoritarianism rises and public trust in the media declines. International organizations are wondering how to reverse these trends.

What impact has the pandemic had on media freedom in Central and Eastern Europe?

More from our experts

Reporters Without Borders (RSF), an organization that focuses on safeguarding the right to information and protecting the press, consistently ranks Eastern Europe as the second worst region for press freedom after the Middle East and North Africa. Within the European Union, Hungary and Poland have raised the most concerns. COVID-19 era policies further threaten the situation in the region, which has deteriorated over the past decade.

Censorship and freedom of expression

Hungary. Prime Minister Viktor Orban’s government has long sought to control the press, imposing censorship laws, pressuring independent media and subsidizing a state-run media machine. In March 2020, the Hungarian parliament granted him sweeping emergency powers and passed new measures that criminalize the dissemination of allegedly false information. Journalists face fines and up to five years in prison, and reporters say they have been denied access to hospitals and prevented from speaking to health workers.

The world this week

A weekly summary of the latest CFR news on the biggest foreign policy stories of the week, with memoirs, opinions and explanations. Every Friday.

A summary of world news developments with CFR analysis delivered to your inbox every morning. Most weekdays.

A selection of original analysis, data visualizations and commentary, examining debates and efforts to improve health around the world. Weekly.

By entering your email address and clicking Subscribe, you agree to receive announcements from CFR about our products and services, as well as invitations to CFR events. You also agree to our Privacy Policy and Terms of Use.

Poland. Warsaw has also sought to reshape the country’s media market by supporting pro-government media and restricting other organizations, especially foreign media. The government and state-owned companies have filed hundreds of lawsuits against journalists, and reporting on COVID-19 has led to further litigation. In February 2021, Polish private media protested against the government’s plan to tax advertising revenue to raise funds for the country’s healthcare system.

Other countries in the region have raised similar concerns. Journalists in the Czech Republic have warned of the growing concentration of media ownership among a handful of tycoons, the closure of independent media outlets and increasing attacks on journalists. In four years, the country has gone from twenty-first place in the world ranking of press freedom to fortieth. Bulgaria, the lowest-ranked EU country on this index, has sought to make “fake news” related to the pandemic punishable by jail time. Observers, including EU officials, also point to growing government pressure on journalists in Slovenia and increased attacks in Slovakia.

More from our experts

What is the state of press freedom around the world?

It is under increasing pressure amid rising global authoritarianism.

According to the monitoring group Freedom House, democracy declined for the fifteenth consecutive year in 2020, and less than a fifth of the world’s population now lives in “entirely free” countries. Since 2013, RSF’s Press Freedom Index has recorded a 12% drop in media freedom worldwide.

Censorship and freedom of expression

In 2020, pandemic restrictions have introduced new opportunities for authoritarian leaders. China, which ranks second to last in RSF’s index, expelled foreign journalists covering its first COVID-19 cases, while Iran, which also ranks near the bottom, tightly controls news about its epidemics. Major democracies have not been excluded from this trend: in the United States, arrests of journalists have skyrocketed by more than 1,200% compared to 2019, including on charges of violating curfews linked to the pandemic. These attacks are accompanied by a crisis of public confidence in the press: a global survey found that 59% of people believe that journalists deliberately mislead the public.

How are international organizations reacting to the decline of press freedom in Central and Eastern Europe?

The calls to action are many. In March 2021, the Committee to Protect Journalists joined over a hundred civil society groups in calling for limits on the prosecution of journalists in Europe. The Council of Europe, the continent’s top human rights body with forty-five member states, criticized Orban’s “indefinite and uncontrolled state of emergency”. Similarly, the United Nations human rights office has expressed concern about Hungary’s disinformation laws and their potential to have a “chilling effect” on the press.

The US State Department has long been concerned about restrictions on the press in Central and Eastern Europe. However, American leadership on press freedom has taken a back seat under President Donald Trump, who has often attacked the media and sought closer ties with Hungarian and Polish leaders. Now President Joe Biden’s administration is raising the question again.

What could the EU do?

Ultimately, Member States are bound by EU law to respect freedom of expression. The EU often speaks out against press restrictions and, amid the pandemic, has made $4 million available to fund press freedom projects.

But applying your own rules is another matter. The bloc has repeatedly clashed with Hungary and Poland over declining democratic standards. He sought to invoke Article 7 of the EU treaty, which would disenfranchise them, and threatened to cut off their EU funding, including pandemic-related economic recovery funds. But since such actions require unanimous support, Budapest and Warsaw can easily veto them; indeed, the two countries have blocked approval of this year’s EU budget until Brussels backs down.

Still, there are signs that the pressure is mounting for press freedom violators. The centre-right European People’s Party, the largest political group in the European Parliament, has decided to expel Orban’s party, Fidesz. And in perhaps the biggest change this year, the European Parliament passed legislation to make it easier to cut funding to countries that break the rules, although implementation is still a long way off.