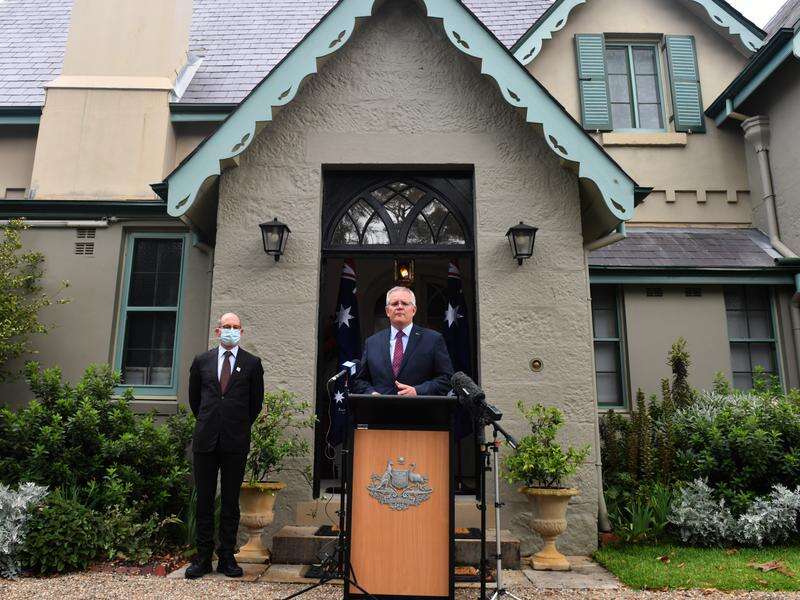 The Prime Minister is monitoring symptoms of COVID-19 after a potentially infectious positive case attended his press conference at Kirribilli House in Sydney.

The press conference was held outside and members of the press wore face masks.

Mr. Morrison does not need to isolate or take a PCR test according to NSW Health guidelines.

A spokesperson for the prime minister said residents of Kirribilli House and staff were acting according to instructions from NSW Health.

“As per NSW Health guidelines, the Prime Minister was not required to self-isolate or get tested, and continues to monitor for symptoms,” the spokesperson said.

Changes in isolation and testing requirements were introduced by the national cabinet meeting on Thursday as cases across the country skyrocketed.

Less than a week later, the number of daily COVID-19 cases is expected to break records across Australia again after the start of the new year with highs in many states.

The Omicron variant disrupts the daily lives of most Australians during the summer school holidays as Queenslanders wake up with new mask demands.

The masks are to be worn inside Queensland from Sunday after the state recorded 2,266 more cases of COVID-19 on the first day of the year.

Previously, masks were only required in supermarkets, shops, public transport and carpooling, as well as airports and airplanes, cinemas and theaters in Queensland.

From Sunday they will also be required at workplaces, except when unsafe, in pubs, clubs and cafes, except when seated, in indoor stadiums and sports arenas, libraries, hairdressers and nail salons and waiting areas in medical centers.

Residents of Queensland have also been urged to revert to work-from-home arrangements where possible.

There have been two deaths in NSW and three in Victoria.

The rise in the number of cases comes as Prime Minister Dominic Perrottet focuses on the number of hospitalizations and intensive care rather than the total number of daily cases.

Hospitalizations also continue to rise, with 1,066 people hospitalized with the virus in NSW and 83 in intensive care.

The four-digit crossover marks a doubling of hospitalized cases since December 27 and a seven-fold increase since the announcement of Omicron’s first hospitalization on December 12.

Another 472 people are in Victorian hospitals with the virus, including 52 active cases in intensive care. Twenty-two people need ventilation.

Meanwhile, Western Australia has reclassified Tasmania, which has gone from 520 active cases of COVID-19 to 938 on New Years Day, and ACT, which has increased by 448 cases for a year to high risk. total of 1479.

This means that starting Monday, anyone entering the state from ACT or Tasmania must be fully vaccinated, take a PCR test within 24 hours of arrival, and take another test on day 12. of his 14-day self-isolation.

They should also use the G2G Now app when in quarantine.

Tasmanian Prime Minister Peter Gutwein has said that with a highly vaccinated population, the state will not be heading for lockdown or closing its borders due to the growing number of cases.