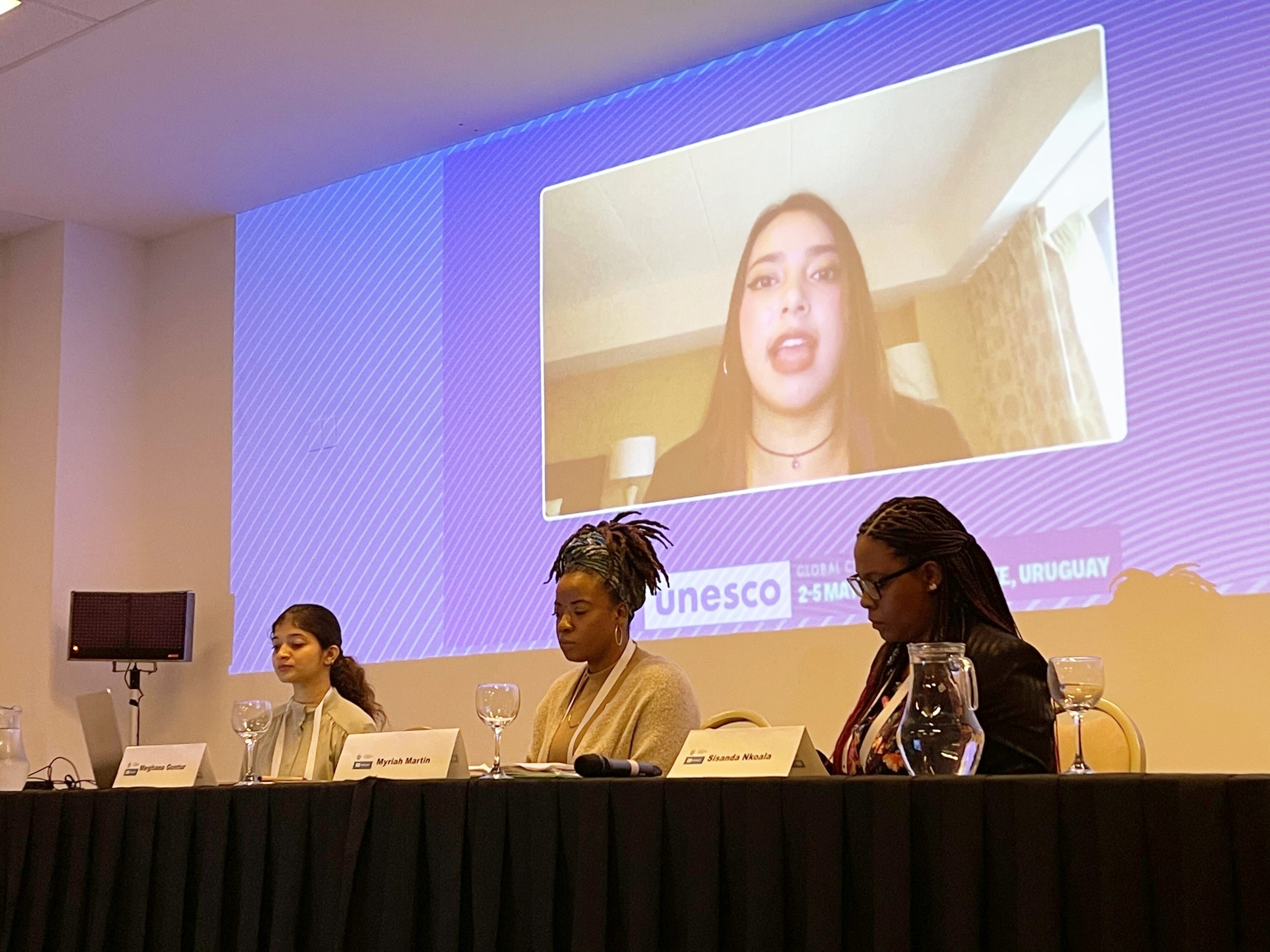 Freedom of the student press around the world

For World Press Freedom Day, the Student Press Law Center and PEN America co-sponsored a panel discussion at the UNESCO World Conference in Ponte del Este, Uruguay, and broadcast on Zoom around the world. SPLC Board Member Pratika Katiyar joined a panel of student journalists and educators from around the world to discuss the role of student journalists, which can be fragile, unique and powerful.

The panel was moderated by Myriah Martin, PEN America Free Expression Programs Fellow in the United States. The panelists were:

The role of student journalists in professional journalism

The session began with a discussion on the role that student journalists play within the media ecosystem.

“Student journalists in the United States have a unique role – they fill gaps in information desert communities,” Katiyar said.

Student journalists in other parts of the world, such as South Africa “are not a recognized group. They don’t have press cards and they don’t have access to certain spaces,” Nkoala said.

In some cases, student journalists must work for a professional media outlet to gain recognition or gain professional experience, and these opportunities are usually not available until after graduation.

“[They were] at the forefront, articulating student demands and demands. It was a watershed moment,” Nkoala said.

Restrictions that Prohibit or Infringe on Students’ Ability to Tell Stories

Each panelist spoke about the legal and societal restrictions placed on student journalists and how they lead to self-censorship.

Guntur pointed out that “[In India, we] they are told to have some discretion when dealing with something related to a specific person or community. “When a bunch of people come up and say this [article] hurts us, the first step is to ban the text in question, [regardless] of an investigation. »

Nkoala said that in South Africa there is no law allowing schools to censor student journalists, but students are subject to prior review of their work or risk expulsion for work that criticizes the institution.

“[My] students submit their work via a YouTube channel, and because I have certain obligations to the institution, I encourage students to give me an unlisted link and not post it until I verify it .

Nkoala acknowledges that this can cause his students to censor themselves by “holding back and not attacking [certain] stories.” but stories like criticizing the institution can get students expelled.

Katiyar pointed out that while the United States is protected by the First Amendment, the Supreme Court’s 1988 decision in Hazelwood School District v. Kuhlmeier limits the freedom of the student press and gives school administrators broad powers to censor student media.

To counter this decision, “state legislatures have the ability to inculcate protections for student journalists [through] New voice legislation,” Katiyar said. Katiyar acknowledges that because only 15 states have new voice laws, many students are unprotected and “choose not to cover important issues in [their] communities”. Even where students have legal protections, they “struggle with what they can and cannot cover due to societal norms.”

Recommendations to student journalists under threat

Guntur says the first step to ensuring the safety of student journalists in India is to “educate the general public about what it is to be a student journalist”. It is important that “the public understands that the purpose of a journalist is to bring visibility to issues and spread the truth”.

“Journalists shouldn’t be penalized for reporting the truth…it’s their job,” she said.

Katiyar added that students should “know [their] rights, especially when it comes to covering protests. She encouraged students to use their voices to uncover stories and “make sure their stories are bulletproof.” And recommends that students receive training in media literacy. “Journalism is everywhere now, it’s on Twitter, it’s on Instagram, and having a media literacy will help students.” She also talked about nationwide support “which means continuing with New Voices legislation so that students in every state are protected, and having support in place like the Student Press Law Center that offers legal aid. free to student journalists”.

Nkoala pointed to some threats that students face because of their race and gender, such as “dominant sexist views and the way female journalists are treated when they leave for their internships.” She said “it’s not uncommon for a student to report that they’ve been sexually harassed and often they do so retrospectively – after graduating.” Nkoala also acknowledged the lack of professional training students receive, as they are not exposed to high-level reporting until their final year of school. Despite their lack of training, students are often expected to work on high-level stories.

“Newsrooms in South Africa are struggling financially, due to lack of investment. As a result, interns are brought in to do senior reporting work, and they cover stories that are completely out of their depth, but they have to deliver at the end of the day,” Nkoala said. To help protect students, she recommends creating a national agency to represent student voice. “Such a body would be able to articulate issues both within the university and within the journalism sector,” Nkoala said.

Nkoala concluded the session by encouraging students to “live your role as a student journalist – you have a niche in an industry that working journalists don’t. You have a perspective that is new – step into it. Nkoala ended by telling the students to “be brave enough to make mistakes.”

Journalists must have full and uncensored access to information

A tragedy for Ukraine, a housing crisis for Turkey