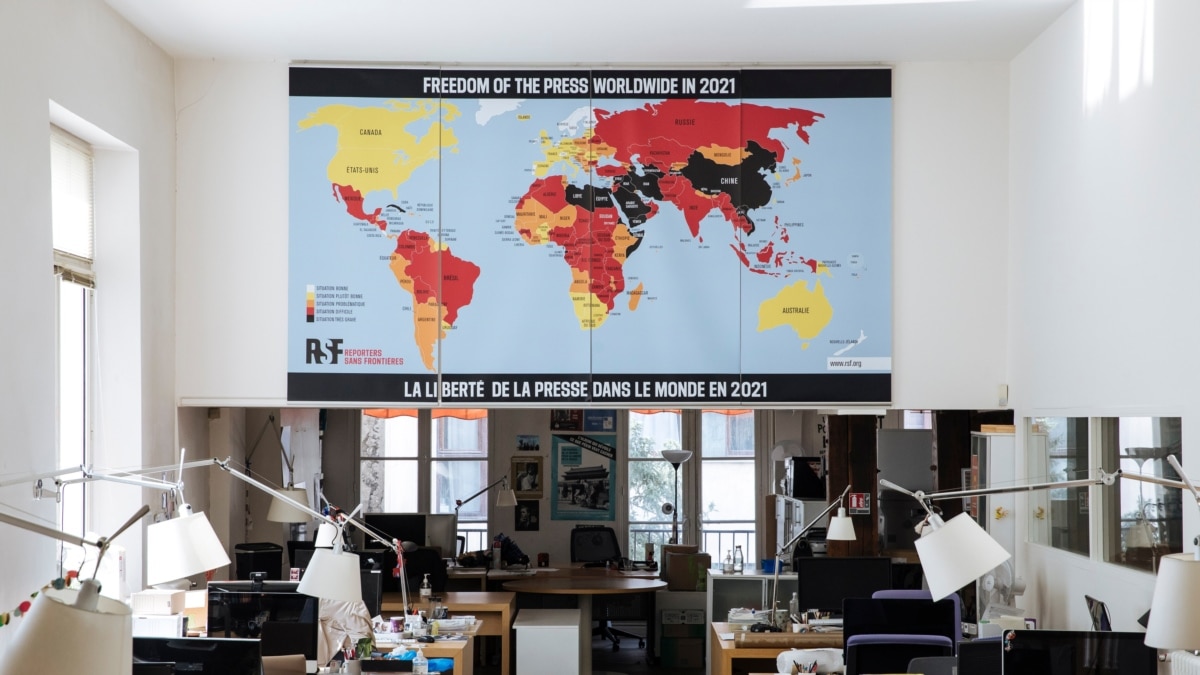 A global decline in press freedom, accelerated by repressive laws introduced during the COVID-19 pandemic, has meant that only 12 countries are considered to have a “good” environment for the media, according to a report published on Tuesday.

During the pandemic, nearly 75% of countries have blocked the media to some degree, media watchdog Reporters Without Borders (RSF) has found.

The biggest drop came in Malaysia, where a controversial fake news law and other restrictive regulations, coupled with arrests, lawsuits and raids, led to an 18-point drop in the annual Freedom Index. of the RSF press.

“The RSF index basically indicates that the situation in Malaysia has actually gone from bad to worse,” Farah Marshita Abdul Patah, president of the National Union of Journalists of Peninsular Malaysia (NUJM), told VOA.

Patah said the media situation was better before the change of government.

“We had hope. We were actually able to sit down and talk about setting up our own media council and scrapping some draconian laws, but since then things have actually gone downhill,” he said. Patah said.

Globally, emergency regulations introduced to contain the virus but instead used to target critical reporting, as well as attacks and arrests of journalists, have led to marked declines in several countries, RSF found.

“We have seen authorities downplaying the severity of the virus, giving mixed messages about it — in some cases accusing the media of inflating information about COVID-19 and its spread,” Nelson said.

The annual index measures indicators of a free press based on 87 questions focusing on laws, self-censorship, media pluralism, independence and transparency, as well as an assessment of attacks and arrests. Each country is then assigned a rank, with 1 being the freest and 180 the most repressive.

Overall, the pandemic has been used as an excuse to restrict access to information, Nelson said.

The restrictions came at a time when access to factual journalism and the media’s role in countering disinformation were more important than ever.

“When journalists are threatened, so is the information, and it has a profound impact on people’s lives,” Nelson said. “Trustworthy journalism is truly the most effective vaccine we have against misinformation.”

After Malaysia fell 18 points from 101 to 119, the head of the country’s press union called on the government to address the problems facing the country’s media.

Patah, from Malaysia’s NUJM, said the introduction of emergency laws and other laws are “somehow aggravating the situation in Malaysia” regarding press freedom.

“So now we have all these laws that basically (are) like a trap for us, to always be careful what we report,” Patah told VOA. “To me, it’s another form of control by the government and a way to make sure that we practice self-control, otherwise we are all liable for prosecution or any other legal action.”

While journalists don’t come under attack like they do in some countries, Patah said problems still exist.

“It’s actually quite bad for us, where the media in Malaysia is only considered if they are able to carry the government’s agenda,” Patah said. Those who don’t “are on their own,” she said, adding, “I think it’s pretty bad for media growth in Malaysia.”

The Malaysian Embassy in Washington did not respond to VOA’s request for comment.

Burundi recorded the biggest jump, climbing 13 places from 160 to 147. RSF cited the president’s call for the media regulator to ‘settle disputes’ with banned media outlets and the presidential pardon of four journalists sentenced to two and a half years in prison.

The journalists, from independent media Iwacu, were arrested in 2019 while covering the unrest.

The country still has room for improvement, with RSF noting that the BBC and VOA are still banned from broadcasting and that fear and self-censorship are widespread.

The report’s findings were welcomed by a senior official in Burundi’s communications ministry. The official, who requested anonymity, said: “It reflects the reality on the ground that the government wants to renormalize relations with the media and give more hope to journalists.”

The head of the Alliance of Burundian Journalists, Melchior Nicayenzi, also welcomed the progress cited by RSF, including talks on lifting the ban on the BBC and VOA. But Nicayenzi said more progress was needed.

“There are still challenges to overcome, such as the independence of journalists to cover all subjects without self-censoring, even sensitive (subjects),” Nicayenzi told VOA.

“There is no progress in terms of press freedom on the ground,” said Alexandre Niyungeko, president of UBJ, adding that it was difficult to talk about progress when the freed journalists had been detained unfairly or that the media had been allowed to do so. “The authorities only restored them to their rights, which is simple.”

Niyungeko added that more than 100 journalists are still in exile and prevented from working and that others have been sentenced to long prison terms. “Is this progress?” Niyungeko asked.

Two other African countries recorded significant improvements in the index.

Sierra Leone (75) improved its ranking by 10 points, partly thanks to the repeal of a law that criminalizes press offences. And an overall decrease in harassment of journalists moved Mali up nine places to 99.

“When we see these kinds of improvements, it really offers hope,” Nelson said, adding that the rankings should act as “an incentive for other nations to follow suit.”

(Etienne Karekezi and Nabila Ganinda contributed to this story.)