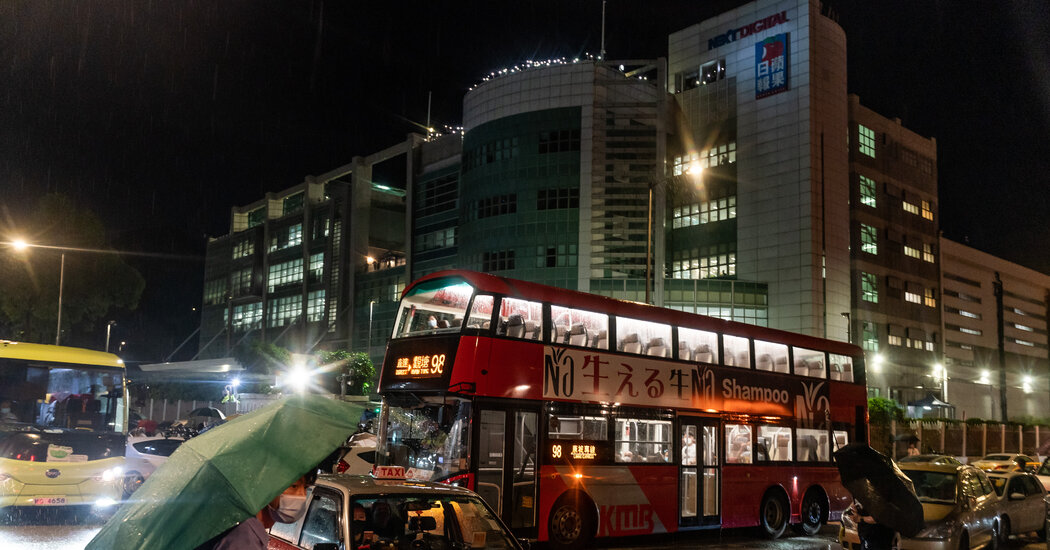 Hong Kong’s vocal and politically diverse media, while free from the constraints imposed on neighboring journalism in mainland China, has faced various threats over the years. But after a draconian national security law took effect a year ago, those challenges have multiplied dramatically.

The mounting pressure on the media was underscored on Wednesday when Apple Daily, a pro-democracy tabloid that often criticizes the Chinese and Hong Kong governments, said it had no choice but to shut down. The newspaper, which had been one of the most widely read in Hong Kong, is the subject of a national security investigation which also jailed its founder, Jimmy Lai.

Although the right to freedom of expression is enshrined in its local Constitution, the Chinese territory is now ranked 80th out of 180 countries and regions in the World Press Freedom Index, up from 18th when Reporters Without Borders published the report. index in 2002.

“There is no doubt that this is the worst of times,” Chris Yeung, president of the Hong Kong Journalists Association, told The New York Times last month.

Here are some of the ways in which press freedom in Hong Kong is being eroded.

In June 2020, the Chinese government imposed a sweeping national security law intended to stamp out opposition to its rule in Hong Kong, a former British colony that was returned to Beijing in 1997. The law was enacted after months of anti-government protests in Hong Kong that has posed Beijing’s biggest political challenge in decades, with some protesters calling for the territory’s independence.

While the law focuses on the four crimes of terrorism, subversion, secession and collusion with foreign forces, the vague way in which it is drafted has implications for the news media, legal experts say. Hong Kong Police Chief Chris Tang warned earlier this year that police would investigate news outlets deemed to endanger national security, citing Apple Daily as an example.

Officials haven’t provided much clarity on what that means. In comments this week, Carrie Lam, chief executive of Hong Kong, suggested it was up to journalists themselves to find a way to avoid breaking the national security law. The law should not affect “normal journalistic work”, she said, although she did not explain what she considered normal.

Since no one knows where the lines are, a common response has been self-censorship. Journalists are avoiding certain topics in interviews, activists have deleted their social media logs, and libraries have pulled books by pro-democracy figures off the shelves for review. Activists, academics and others are also less willing to speak out, a reluctance that was reinforced last month when a judge, explaining why a former lawmaker charged under the National Security Act was seen denying bail, cited comments she made in interviews as well as in private WhatsApp messages to reporters.

In August 2020, police arrested Mr. Lai under the national security law, as he predicted in an opinion essay for The Times. Hours later, they raided the offices of Apple Daily, his fiercely pro-democracy newspaper. Some reporters live-streamed video of the raid as officers searched their offices. Police also arrested Mr. Lai’s two sons and four executives from his company, Next Digital.

Mr. Lai, who was previously arrested for his role in unauthorized protests in 2019, was charged under the national security law with colluding with foreign forces, including calling for sanctions against Hong Kong. He is already in jail for a total of 20 months for two protest-related cases, but he still faces additional charges, including fraud and three counts under the National Security Act, which could result in a life sentence. (Hong Kong’s first national security trial began on Wednesday.)

The August raid now appears to have been just a warm-up. Hundreds of police raided the Apple Daily newsroom last week, arresting five top executives and editors, seizing reporters’ computers and freezing company accounts. Two of those arrested have been charged under the Security Act with conspiracy to collusion with foreign powers. A senior superintendent with the National Security Department of Police also warned the public not to share Apple Daily stories online.

Unable to pay its employees with its frozen accounts, Apple Daily announced on Wednesday that it would close after 26 years. The day began with the arrest of the newspaper’s senior opinion editor, Yeung Ching-kee, who wrote under the pen name Li Ping. The Chinese Communist Party and its allies in Hong Kong “decided to strangle Apple Daily, kill freedom of the press and freedom of speech in Hong Kong”, Mr. Yeung wrote after Mr. Lai’s arrest. Last year.

A public broadcaster under pressure

RTHK, a government-funded public broadcaster known for its independent reporting, is increasingly restricted. In a report released earlier this year, the Hong Kong government accused the broadcaster of lacking transparency and objectivity and said it should be monitored more closely. Other officials have suggested shutting it down completely.

A series of senior officials have left RTHK in recent months, including the Director of Broadcasting, who has been replaced by a civil servant with no journalism experience. Since then, the broadcaster has canceled shows, rejected media awards and deleted archive content from its YouTube and Facebook accounts. Ms. Lam received her own show, broadcast four times a day, to explain changes to election laws that critics say have all but excluded pro-democracy candidates.

The Latest on China: Essential Things to Know

A joyless triumph. Despite China’s best efforts to continue the Winter Games in a festive spirit, the Beijing Olympics have been forced into a global health disaster, fraught with geopolitical tension and marred by doping accusations.

In April, Choy Yuk-ling, an RTHK independent producer, was fined after being found guilty of making false statements to obtain public records, in a case the Committee to Protect Journalists heard. described as “disproportionately absurd”. Ms Choy, who had worked on a report critical of the police, said her case showed how authorities were trying to restrict access to information that was once publicly available. She is appealing her conviction.

Beyond the national security law, there have been small policy changes that Hong Kong journalists say could hamper their ability to do their job. Some of the changes involve interactions with police, who had tense clashes with journalists during the 2019 protests. Last year, police said they would only recognize journalists’ credentials if they worked for media registered with the government or for leading international news outlets. Chief Tang also said access to police operations on the ground should be limited to “trusted media”.

Separately, the government is set to allow companies to conceal sensitive ownership data, which critics say could make it harder to uncover fraud.

The media also reported delays in processing visas for foreign employees, and in a few cases they were denied. The Times cited national security law and visa disruptions in its decision last summer to transfer some Hong Kong staff to Seoul, although other international news outlets said they did not. had no intention of leaving.

Other challenges could be on the way.

Ms Lam sounded the alarm last month when she said the government was considering legislation against “fake news”, the question being how fake news should be defined and by whom. Similar legislation enacted in Asian countries like Cambodia, Malaysia and Singapore has been criticized as a tool to stifle dissent.