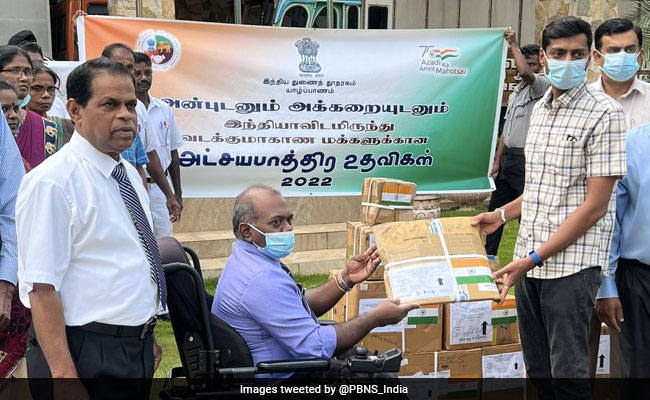 The aid will provide general and intensive care in the Northern Province of Sri Lanka.

In continuation of the Government of India’s continued support to the people of Sri Lanka, India as part of the latest aid provided two truckloads of life-saving drugs and equipment to Jaffna Teaching Hospital (JTH) on Saturday.

The aid was handed over by the Consulate General of India, Jaffna Raakesh Natraj, to the Director (Acting), JTH, Dr Nanthakumar. Further aid to Sri Lanka should follow. The aid will provide general and critical care in the island nation’s Northern Province.

In line with its ‘neighborhood first’ policy, India has again come forward to help Sri Lanka during its economic crisis. The High Commissioner in Colombo, Gopal Baglay, on Friday handed over a total of 3.3 tons of essential medical supplies to the Suwaseriya ambulance service in 1990.

Baglay said External Affairs Minister S Jaishankar was briefed on the impending shortage of medical supplies facing the Foundation during his visit to Suwaseriya headquarters in Colombo in March 2022.

“Another promise made to the people of #SriLanka has been fulfilled!!! During his visit in March, EAM @DrSJaishankar was briefed on the medicine shortages experienced by @1990SuwaSeriya. The High Commissioner today handed over 3.3 tonnes of medical supplies to help the vital lifeline run smoothly,” the Indian High Commission in Sri Lanka tweeted.

Another promise to the people of #Sri Lanka delivered!!! During its visit in March, EAM @DrSJaishankar was made aware of the drug shortages facing @1990SuwaSeriya. The High Commissioner today handed over 3.3 tons of medical supplies to keep the vital lifeline running smoothly. (1/2) pic.twitter.com/JeSNlzMmto

Responding to the urgent need for medical supplies, the High Commission said the Indian Navy (INS) vessel Gharial had been specially deployed for this purpose.

India is becoming a stronger and more mutually beneficial partner for Sri Lanka. Apart from assistance during the pandemic and the fertilizer chaos, India is also donating the commodities to the island nation.

Earlier on May 27, India’s Acting High Commissioner to Sri Lanka Vinod K. Jacob handed over a shipment of over 25 tons of medical supplies to Health Minister Keheliya Rambukwella in Colombo.

Taking to Twitter, India’s High Commission in Sri Lanka said the consignment is valued at nearly 260 million rupees. These efforts prove that Prime Minister Narendra Modi’s “Neighborhood First” policy, which places engagement between people, is still active. These are complemented by the people of India who have also made generous donations to their brothers and sisters in Sri Lanka.

What’s happening this weekend at the Phillies-Angels Series, June 4-5