Is India facing a post-pandemic jobs crisis? | Asia | An in-depth look at news from across the continent | DW

Pramod Lal is a 23-year-old business graduate from northern India who thought he had the qualifications to compete in the job market. However, Lal’s attempts to start a career haven’t succeeded yet.

“Education is no guarantee for a job and I only got rejection letters in the last year,” Lal told DW.

Meanwhile, an increasing number of long-employed people are now being made redundant.

Lata Jain, a receptionist in the central state of Madhya Pradesh, was made redundant during the coronavirus pandemic in 2020. She has yet to find gainful employment despite years of work experience.

“I was ready to take a pay cut and work more hours to get back to a white collar job. But it’s proving difficult. I don’t know how long my bad luck will last,” Jain told DW.

According to the Center for Monitoring Indian Economy (CMIE), a think tank specializing in collecting economic data, more and more people are not even looking for work anymore.

People line up at a job fair in New Delhi

In December 2021, the CMIE estimates that one in five university graduates is unemployed.

The northern state of Haryana is the most affected, with 34.5% unemployment.

Since 2020, the coronavirus pandemic has hit the Indian labor market hard, and the effects are still visible in the economy, especially in the informal sector.

While the restrictions and lockdowns that led to huge job losses two years ago have largely been lifted, workers appear hesitant to re-enter the labor market.

But in fact, the data shows that people were leaving the workforce even before the pandemic. The CMIE said that between 2017 and 2022, the overall labor force participation rate fell from 46% to 40%.

This is why the CMIE does not consider the overall unemployment rate to be a reliable measure of labor market tightness.

“The problem of unemployment has gotten much worse since that time. Many feel angry about the time they have invested in education and finding jobs,” Vyas added.

Indian workers are turning to the informal sector

Employment problems are compounded for those working in India’s informal sector, such as those seeking employment in construction or agriculture without guaranteed work or guaranteed wages.

Gig workers also complain of a lack of job security, benefits and wages that often do not meet minimum wage requirements.

Various chambers of commerce estimate that India had 15 million gig workers before the pandemic hit.

Start-ups, including some of the famous unicorns like Ola, Uber, Zomato and Swiggy, have become a major driver of India’s gig economy. They hire contract freelancers in skilled and unskilled jobs to cut costs.

However, it is difficult to officially quantify the exact impact of these tech-driven odd jobs on overall unemployment.

“There is no hard data on the economic activity of the informal sector,” said Lekha Chakraborty, a professor at the National Institute of Public Finance and Policy.

“The potential of fin-tech, AI, machine learning, big data analytics, e-commerce is in demand and skills will be a big determinant to access these new normal labor markets” , Chakraborty told DW.

“Having said that, we have to recognize the fact that only less than 10% of the entire workforce in India is in the organized sector,” he added.

“The government’s role as an employer of last resort must be strengthened by providing fiscal space for job guarantee programs,” Chakraborty said. 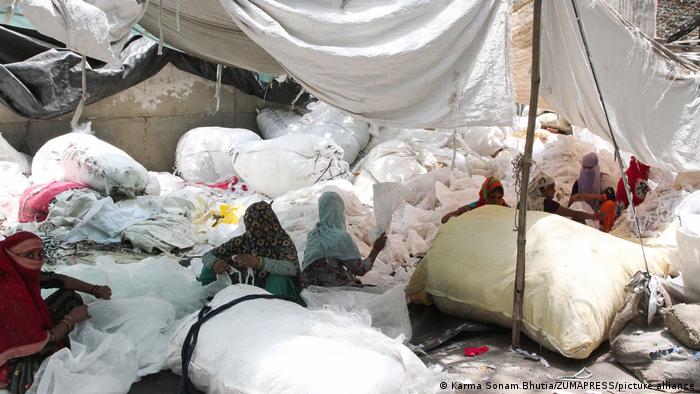 Widespread disappointment with the lack of jobs was evident in January of this year.

It was found that over 12 million people had applied for 35,000 office jobs at Indian Railways, India’s largest employer.

Although the government’s budget announced in February aims to create 6 million jobs over the next five years, it has also highlighted the tensions between job demand and the government’s policy response.

Economic analyst MK Venu said the actual unemployment rate should be calculated as a ratio of those actually looking for work.