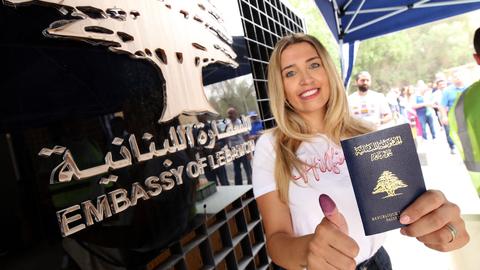 Lebanese expats from 48 countries, including the United States, Russia, France and the United Arab Emirates, voted ahead of the May 15 legislative elections.

More than 194,000 people were registered to vote on Sunday, according to the official national news agency.

In Paris, long queues were reported outside the embassy, ​​and voting also took place in Canada and the United States.

On Friday, in an earlier phase, more than 18,000 Lebanese voted in nine Arab states and Iran, with turnout reaching 59%, a slight increase of 2% from 2018 polls.

The critical election comes amid an unprecedented financial crisis that has caused a mass exodus of people, although while opposition figures have pinned their hopes on the diaspora vote, experts say the status quo policy should continue.

The vote is the first since the start of the economic crisis and the devastating 2020 port explosion in the capital Beirut, with many accusing the political elite of rampant corruption and mismanagement.

“I voted for change,” said Abed Saad, who voted in Dubai, where people waited in line for up to three hours.

“If we don’t vote, others will win, and we don’t want them to win,” the 27-year-old said, referring to established parties.

But voter registration, though on the rise, remains relatively low among the millions of Lebanese living abroad.

Lebanese Foreign Minister Abadallah Bou Habib said turnout in Dubai had reached 15% in just two hours, with the queue of voters outside the Lebanese consulate stretching nearly a kilometer despite the heat suffocating.

Turnout in 10 predominantly Arab countries on Friday was around 60%, Bou Habib said, matching the overall turnout in the 2018 polls overseas.

Since 2019, the Lebanese pound has lost over 90% of its value and poverty rates have skyrocketed to cover over 80% of the population.

The World Bank has called the economic crisis one of the worst since the mid-19th century. The authorities have repeatedly failed to chart a way out of the crisis.