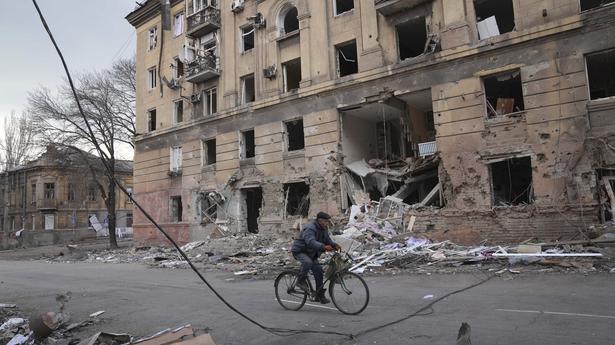 Moscow’s goals do not include overthrowing the Kiev government and it hopes to make more meaningful progress in the next round of talks with Ukraine, Russia said.

The Executive Board of the International Monetary Fund on Wednesday approved $1.4 billion in emergency funding for war-torn Ukraine to help the country deal with the “massive humanitarian and economic crisis” caused by the Russian invasion.

Ukrainian officials said a Russian strike hit a children’s hospital and a maternity hospital in the beleaguered port city of Mariupol in the southeast of the country.

Ukraine’s government has banned the export of wheat, oats and other staples that are crucial to the world’s food supply as authorities try to ensure they can feed people during the intensification of the war in Russia.

Meanwhile, India is expected to end the evacuation drill – Operation Ganga – on Thursday, an official said urging the few remaining Indians to opt for the last flights out of Ukraine.

The conflict began to escalate on February 21, 2022, after Russian President Vladimir Putin recognized breakaway regions in eastern Ukraine and deployed troops in a peacekeeping role.

Read | A useless war and its grave omens

Editorial | A chance for peace: on the Russian-Ukrainian talks

Here are the latest updates:


Twitter launched a privacy-protected version of its site to circumvent surveillance and censorship after Russia restricted access to its service in the country.

Russia has blocked access to Facebook and restricted Twitter in an attempt to restrict the flow of information about its war in Ukraine. Both companies said they were working to restore access for people inside Russia, even as they restricted the country’s state media from accessing their services. -AP


Sony said on Thursday it had halted PlayStation shipments to Russia and suspended operations of the gaming giant’s online store there, the latest global brand to avoid the country following its invasion of Ukraine.

In a video address on Wednesday evening, the Ukrainian leader said three humanitarian corridors had allowed residents to leave the towns of Sumy, Enerhodar and around Kyiv. -AP

White House warns Russia could use chemical weapons in Ukraine


The Biden administration publicly warned on Wednesday that Russia may seek to use chemical or biological weapons in Ukraine as the White House dismissed Russian allegations of illegal chemical weapons development in the country it invaded.

Russian Foreign Ministry spokeswoman Maria Zakharova this week accused Ukraine of running chemical and biological weapons labs on its territory, backed by the US White House press secretary , Jen Psaki, called Russia’s claim “absurd” and said it could be part of an attempt. by Russia to prepare the ground for itself using such weapons of mass destruction against Ukraine. -AP

Harris lands in Poland amid turmoil over jets for Ukraine


Vice President Kamala Harris’ trip to Warsaw to thank Poland for hosting hundreds of thousands of Ukrainians fleeing the Russian invasion took an unexpected turn before she even left Washington. She parachutes amid unexpected diplomatic turbulence above the fighter jets.

The Polish government on Tuesday presented a plan to transfer its Russian-made fighter jets to a US military base in Germany, in the hope that the planes would then be handed over to Ukrainian pilots who would try to fend off Russian forces. In turn, the US would supply Poland with US-made jets with “matching capabilities”. -AP