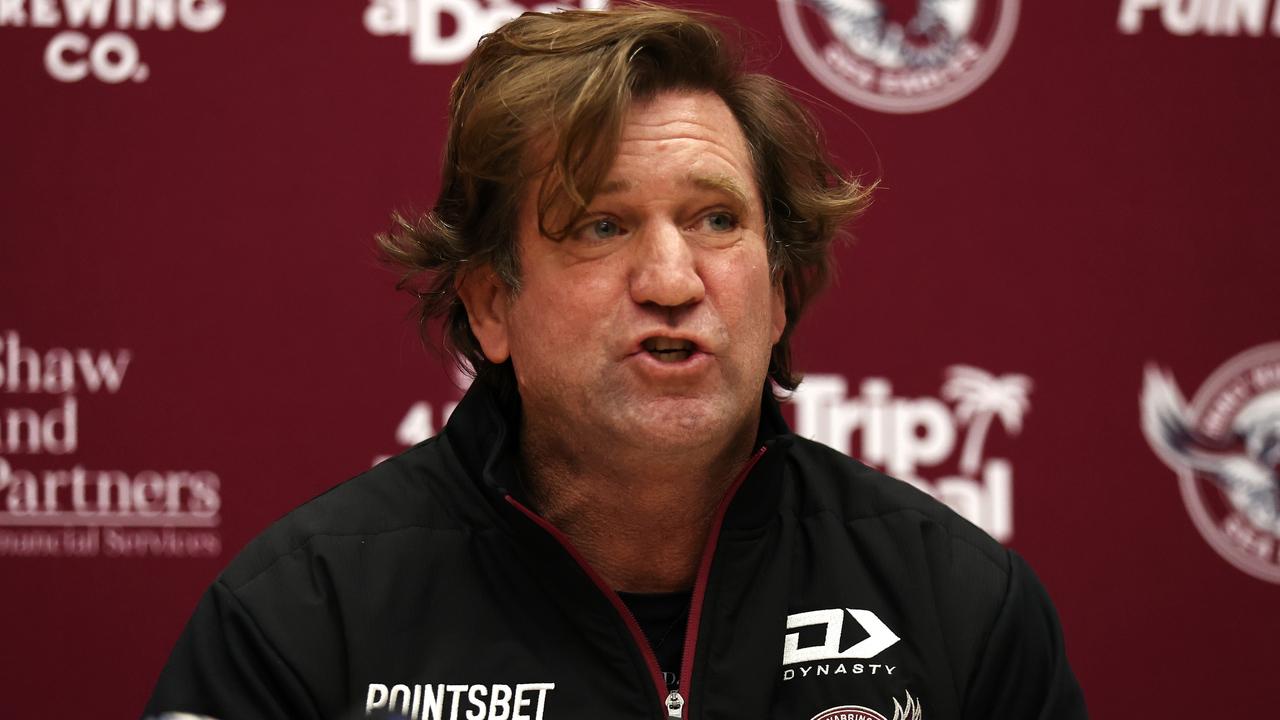 Manly coach Des Hasler has deflected a question about why he and captain Daly Cherry-Evans were facing the media to apologize, instead of club management, for the rocking pride shirt saga the NRL club.

An emotional Hasler on Tuesday apologized for the club’s ‘serious mistakes’, admitting there ‘was little consultation or collaboration with key stakeholders’ in a process that saw seven players pull out of Thursday’s clash with the Sydney Roosters.

TEAM TIPS: What Manly will do after seven players confirm their boycott

While Hasler and Cherry-Evans suggested they were at the press conference by choice, the coach explained why it was he who apologized – although he apparently acknowledged that he and the players didn’t. were not involved in the decision to wear the shirt.

“You’ll have to talk to management about it. I can’t answer that,” Hasler said.

The Sea Eagles will become the first club in rugby league history to wear an LGBTQIA shirt, but the club have come under fire for admitting players were unaware of the initiative until they read it in the newspaper. Pressed on when and how the players were consulted on the shirt initiative, Hasler again answered the question.

“There will obviously be an internal review, no doubt. And that’s all I can really comment on right now,” Hasler said.

Hasler confirmed that the seven players who did not wish to wear the jersey – Josh Aloiai, Jason Saab, Christian Tuipulotu, Josh Schuster, Haumole Olakau’atu, Tolutau Koula and Toafofoa Sipley – would not play in Sunday’s clash, their absences set to have huge ramifications in the Sea Eagles’ pursuit of a top-eight berth.

Team captain Daly Cherry-Evans supported all of his players and said it was a unique situation for the group of players, but insisted the team still had a chance of winning against the Roosters .

“It’s a situation where (in) right now. Like a lot of things in life, we can’t make everyone happy,” Cherry-Evans said.

“I’m trying to say very clearly that as a person you have a right to see your own actions. With those actions and consequences and repercussions, we just have to make sure that any of those things get too out of control and we better support our teammates in their decisions.

“…I see it as a challenge as a player, as the skipper of the club team.