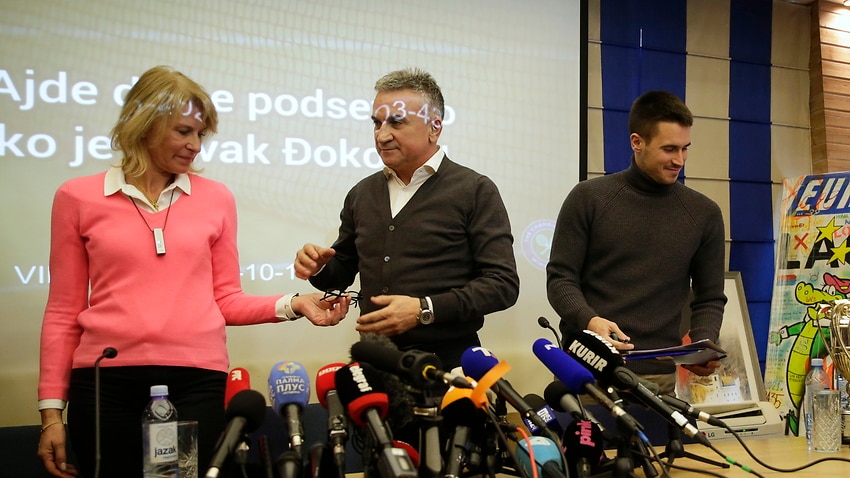 The Djokovic family confirmed that the tennis star tested positive for COVID-19 on December 16.

“The process was public and all documents were public or legal,” Novak’s brother Djorde told reporters.

A reporter then asked if he then attended an event on December 17, in which photos uploaded to social media showed Djokovic and a number of children not wearing masks.

“‘OK, so this press conference is adjourned for now,” Djordje said after a short break.

Earlier in the press conference, Djokovic’s mother, according to a BBC translator, said her son “was subjected to torture, harassment” while in detention at Carlton’s Park Hotel.

“We will hear even more about what he went through,” she said.

Dijana Djokovic also said: “This is her biggest victory of her career, it’s bigger than any Grand Slam tournament.”

After his release from detention on Monday night, Djokovic headed to Rod Laver Arena for a training session in preparation for his Australian Open title defense and to try to secure a record-breaking 21st title in the Grand Slam.

Tweeting a photo of him and his team on the main court of the complex, Djokovic wrote: “I am happy and grateful that the judge rescinded the cancellation of my visa. Despite everything that happened, I want to stay and try to compete @AustralianOpen I stay I flew here to play one of the biggest events we have in front of amazing fans.

So far I can’t say more, but THANKS everyone for being by my side during all of this and for encouraging me to stay strong. “

The message was followed by several prayer emojis.

I am happy and grateful that the judge overturned the cancellation of my visa. Despite everything that happened I wanna stay and try to compete @Australian Open
I stay focused on this. I flew here to play one of the biggest events we have in front of amazing fans. ?? pic.twitter.com/iJVbMfQ037

The Serb was allowed into the court late at night to relax and familiarize himself with his tennis rackets after spending nearly a week under surveillance at the Park Hotel and the day in his lawyers’ office listening to the case.

After several hours of legal arguments, he heard Federal Circuit Court Judge Anthony Kelly overturn the decision to block his entry into Australia. The judge said Djokovic had not had enough time to speak to Tennis Australia officials and lawyers to respond to the announcement of the intention to cancel his visa.

However, he is still not guaranteed to compete. A spokesperson for Immigration Minister Alex Hawke said the minister plans to use discretionary powers under Australia’s migration law to revoke Djokovic’s visa again.

Djordje Djokovic said Novak “went to Australia to play tennis, to try to win the Open and to take the record that he has been chasing for so many years”.

“We love Australia, Novak loves Australia, he has won it so many times, we will keep coming back,” he said in Belgrade.

Following Monday’s court ruling, there were chaotic scenes in Melbourne as fans of the world’s No. 1 tennis player gathered around a car they thought was transporting Djokovic and chanted “Free Novak! Free Novak! “

Two policemen were injured and a man was arrested in the scuffle.

The Djokovic saga has brought Australian border policies and the treatment of asylum seekers to the forefront of international attention.

Crowds of people have demonstrated outside the Park Hotel in recent days to draw attention to asylum seekers inside, some of whom have been in Australia’s immigration system for nearly a decade and have not been allowed to leave detention centers during legal battles.

A fire has broken out in the facility in recent weeks and inmates said they were given meals with maggots and mold to eat.

It was also the site of a COVID-19 outbreak, where half of the inmates and around 20 staff were infected.