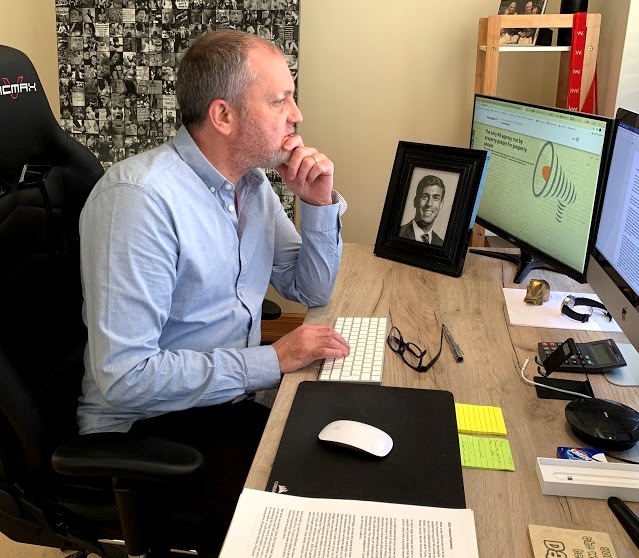 OPINION: Crisis? What Crisis? Only one of our own manufacture

The Bank of England, one of the institutions responsible for protecting our financial interests and avoiding bad things, says we are likely to enter a recession in 2023.

It’s a bit like the babysitter announcing “I think the kids are going to fall down the stairs” as they stand aside while watching your offspring teeter precariously on the top step.

See the quality of tenure we pay Andrew Bailey £575,000 a year for and where we seem to have gone from Mark Carney’s unreliable boyfriend, the hysterical harbinger of fate, to Andrew’ closing the door after the horse fled’ Bailey.

We might be better off sticking a few random names in a hat and picking one as Governor of the Bank – Surely Gladys Jones, 55, a table lady from Laindon, would do a more impressive job? I would suggest a role-swap, but I feared the schoolchildren of Basildon were going to starve as Bailey, decked out in a hairnet and white boots, laments that ‘someone’ had forgotten to turn on the oven.

“Recession” is a grim word. I’ve been through three real economic downturns, two in my working life, and I remember they weren’t so pleasant. Soaring unemployment, store closures, financial hardship, bankruptcies, home foreclosures, doomsday sentiment all around and further proliferated by political desperation and supercharged unions shutting down the country as they insist on pay deals in spades to offset the effect of economic conditions.

But in reality, recession is just a technical term. This means “two consecutive quarters of negative GDP growth”. Let’s be honest, even though the most recent GDP figures show a 0.1% drop in the second quarter, did you really notice it? And if this statistic repeats in the third quarter, will the statistic itself affect you in any way? No of course not.

No, “recession” is a fashionable prospect, but it has an impact nonetheless as it is weaponized by lecherous media as something to scare us. Scary stories and sensational headlines sell.

For example, in 2008, when some bank traders threw themselves out of windows and others scrambled to find boxes to pack their family photos in as they were unceremoniously chased from their offices, we’ve seen the media fuss as much as they could. Television journalists in particular seemed to be reveling in the impending financial crisis and adding gallons of kerosene to the smoldering fire speculating that all the banks would go bankrupt and world economies would collapse.

In particular, they bypassed Northern Rock as vulnerable.

Within 24 hours of speculation that Northern Rock would go to the wall, news helicopters circled Northern Rock branches accompanied by drooling reporters on the ground saying they were stunned by the throngs of shoppers now meandering through the main streets queuing to withdraw all their money – the queues they themselves had caused. And that immediately caused more panic and, inevitably, the collapse of said bank. The media is often very adept at fulfilling such self-fulfilling prophecies.

As we approach 2023, it will happen again. A voracious media jam-packed with editors who are all hardwired to outdo themselves, will tweak, exaggerate and exaggerate any statistical morsel they can and will exploit every possible eccentric guest and commentator in order to prophesy that Britain is on the point of burning the ground financially.

The real estate sector plays an important role in all of this because it is widely recognized, even by the most intellectually disabled politicians, that the health of the housing market is linked to the dynamism of the economy at large. That’s why then-Chancellor Rishi Sunak sought to prop up the property market during the pandemic with a stamp duty holiday, not because he has a penchant for estate agents, but because the Owner positivity translates into consumer spending and generally positive sentiment.

Our duty now in the face of the sensationalism we are about to witness is to stay positive about our market and not let the doom monkeys trick us into contributing more negative sentiment by driving the market down.

Because for every real estate investment, consumer or business decision that is delayed or canceled today due to recession “fears”, for every acquiescence in lower house prices, for every guess about rising unemployment, etc., there will be ten more people listening and then following that lead sitting on the fence tomorrow.

The more people who are scared off by mere speculation, even if it is based entirely on the technical data I referred to earlier, the less money will be spent and therefore the more likely it is that we let’s actually cause the slowdown ourselves based on our own hyperbole. We will literally call ourselves poorer by guessing about economic hardship and abstaining from economic activity as a result. Oh ! As someone once said.

The self-fulfilling prophecy of 2008 beckons us once again and we face the same old danger of forcing ourselves into a real downturn, totally and completely unnecessarily. That is, only if we allow it ourselves.

Russell Quirk is co-founder of ProperPR.