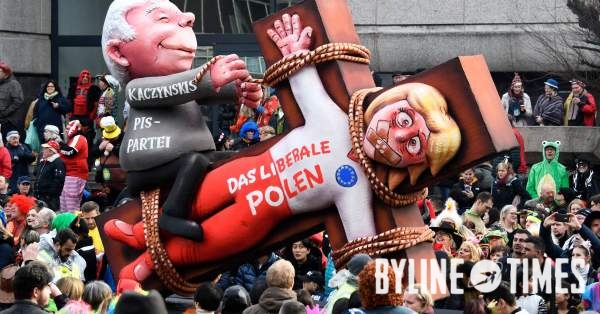 After two days of political turmoil, Poland’s parliament passes controversial media law that could further clamp down on press freedom in the country – despite initial intention to suspend voting after ruling coalition collapses

The Polish government voted on a controversial new media law despite fears it would fail to secure a majority to pass a bill prohibiting companies outside the European Economic Area from having majority stakes in Polish media companies .

The vote took place after the dismissal of Prime Mister Mateusz Morawiecki Jarosław Gowin, the leader of the smaller Accord party which was a partner in the ruling coalition.

The Accord Party withdrew from the coalition after Gowin’s sacking. However, even without the support of the Accord, the bill was passed by 228 votes to 216.

Poland is ruled by the United Right coalition. Law and Justice (PiS) is the biggest party; alongside the more liberal Gowin accord; and the united far-right Poland, led by Minister of Justice Zbigniew Ziobro.

Explaining Gowin’s departure, government spokesman Piotr Müller told the Polish press that “we [were] observing with concern the measures taken by Jarosław Gowin; compromises the actions of the Polish government and order ”.

After Gowin’s departure, former Polish Prime Minister and former President of the European Council Donald Tusk noted that the government “is no longer fit for one thing: resignation.” Tusk was active in the liberation movements of the 1980s for independence from Poland.

In the aftermath of Gowin’s sacking, it looked like the vote would be suspended in order to avoid defeat after the government lost its majority. However, the bill was passed in what is yet another attack on press freedom in the country.

Before the suspension of the vote, Müller had expressed his confidence that the coalition would find enough MPs to pass the law and thus avoid an early election. “I am not convinced that we have lost our majority,” he added.

The adoption of this controversial bill will intensify the current dispute over press freedom in Poland.

The new law prohibits companies located outside the European Economic Area from owning majority stakes in media companies and is widely viewed as an attack on broadcaster TVN, owned by US company Discovery.

TVN is one of the few independent news channels remaining in Poland. During protests in Warsaw against the bill, Iwona Leliwa-Kopystynska, 66, said Reuters that if TVN loses its license, “it’s the end – there is no democracy, no freedom of speech”.

Journalist and author Anne Applebaum tweeted that if the law were passed, “Poland could no longer be considered a democracy”. After the vote, she tweeted “The vote was illegal and will be challenged in court on many grounds.”

More than 750 journalists published an open letter criticizing the bill. In it, they said they would not “allow the destruction of media freedom in our country” and called on “the international public to intervene”.

“The neutralization of the TVN and its subordination to the state is one of the final stages of the takeover of the last institutions which keep an eye on the government and defend democratic values,” the letter said. “If the government silences a disturbing media, it will also be the fate of other free media. This battle cannot be lost.

In the United States, the White House made known its discontent ahead of the vote, with a bipartisan group of senators declaring that “any decision to implement these laws could have negative implications for defense, business and trade relations.” They urged the Polish government to “pause before acting on any measure that would impact our long-standing relationship”.

The Polish government defended the law. Prime Minister Morawiecki told a press conference on Tuesday that he aimed to prevent companies from “Russia, China or Arab countries” from buying Polish media.

However, an amendment proposed by Gowin to allow member countries of the Organization for Economic Co-operation and Development (OECD) to do so – which would include the United States – was denounced by Jarosław Kaczyński, the leader of Law and Justice and from Poland de facto rule.

Kaczyński called the idea of ​​an OECD company to buy Polish media “funny” and said the risk would be “huge” and would include “money laundering, entry into Polish media of the drug industry ”.

Since Law and Justice came to power in 2015, press freedom in Poland has been severely weakened. Last year, state-controlled oil refinery company PKN-Orlen bought up huge chunks of regional media – leaving little room for a press ready to criticize the Polish government.

Reporters Without Borders now ranks Poland 64th in its press freedom index – in 2015 it was ranked 18th in the world.

OUR JOURNALISM COUNTS ON YOU

Thank you for reading this article

A new kind of newspaper – independent, fearless, outside the system. Fund better media.

Our main investigations include Brexit, the Empire and the Culture Wars, Russian meddling, the coronavirus, cronyism and far-right radicalization. We’re also introducing new color voices in Our Lives Matter.