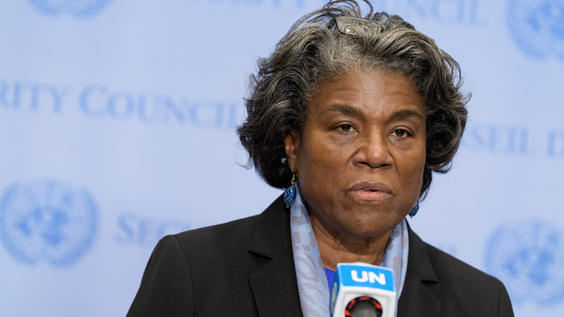 The Security Council’s agenda for May includes a public debate on the link between armed conflict and food insecurity, as well as a presentation on the risks and benefits of using technology to maintain peace and security, said its chairman for the month at a headquarters press conference today.
Linda Thomas-Greenfield (US), recalling that the link between conflict and food security was discussed during her previous Council presidency in March 2021, said Secretary of State Antony J. Blinken would chair a discussion public on May 19, again shedding light on the issue. She added that the United States wants to ensure that growing food insecurity does not create new conflict and instability in fragile states.
On May 23, the 15-member body will host a technology and security briefing. “This is a new and important objective of the Council,” she said, noting that it was high time for him to fully address the impact of digital technology on maintaining international peace and security.
In addition to these two major events, the Council will continue to be seized of the Russian Federation’s war on Ukraine, with a briefing scheduled for May 5 and possibly others to follow, she said. declared.
On Syria, the Council will hold meetings on 20, 27 and 31 May, respectively on its humanitarian, chemical and political files.
She also highlighted an annual debate on the protection of civilians on May 25, saying the event took on added significance, given attacks on civilians in Ukraine, as well as such incidents in Ethiopia, Yemen and Myanmar.
Throughout the monthly programme, her delegation seeks to ensure that the program on women, peace and security is fully integrated. The United States also aims to include civil society speakers at every meeting, if possible, and wants to ensure that all informants are protected from retaliation. Her delegation also strives to ensure gender balance and diversity among guest speakers.
Adding comments in a national capacity, she said the issue of conflict and food security is “personal” as she has witnessed with her own eyes that famine and malnutrition are largely caused by war. It is even more urgent today due to the unreasonable invasion of Ukraine by the Russian Federation. On May 18, on the eve of the Council’s open debate, the United States will host a Call to Action for Global Food Security at the Ministerial Level at United Nations Headquarters in New York. The event will bring together foreign ministers from many regions and discuss urgent humanitarian needs and explore ways to build future resilience.
At the second signing event, she said peace and security has been completely transformed by digital technology for better or worse. These tools can be misused to spread misinformation, restrict access and deny human rights, but they also offer opportunities to do tremendous good. They can help identify emerging threats, protect civilians and civilian infrastructure, and reconnect and reunite displaced people with their families. They can help prosecutors gather evidence to build war crimes cases, connect refugees with host families and job opportunities, and better prepare peacekeepers to deploy. The event will contribute to the Council’s understanding of the changing landscape.
On Syria, she said the dire humanitarian situation is a priority for the United States. She will travel to the region to take stock of the vital aid being channeled to Syria through the cross-border mechanism.
On May 17, the United States will hold a memorial in the General Assembly Hall for former Secretary of State Madeleine Albright.
From the outset, Ms. Thomas-Greenfield recognized in her national capacity that 3 May marks World Press Freedom Day, emphasizing that freedom of the press is>, fights disinformation and keeps governments in check.
Responding to questions, she said the Secretary-General would intervene in the public debate on conflict and food security. There will be no final document for the two signing events.
Asked about the Security Council’s inability to stop the war in Ukraine and what the United States can do, she said “we are succeeding” in isolating the Russian Federation in the 15-member body, unifying the voice condemning that country in the General Assembly, to introduce Assembly resolutions on humanitarian aid and to suspend the Russian Federation from the Human Rights Council. In the Security Council, “they [the Russian Federation] are on the defensive,” she said, emphasizing that she intended for this to continue.
On reproductive health and rights, the US administration’s position is clear, she said, noting that her country has restored its position on this issue to align with US allies. United Nations and global standards to support women’s health. The United States has restored its funding from the United Nations Population Fund (UNFPA). She denied there was a hangover effect on this issue from the previous administration.
Accused of using double standards on the situations in Ukraine and Palestine, she said the United States took a tough stance on Israel’s security – its right to defend the country against Hamas attacks, but believed that Israel and Palestine equally deserved their rights.