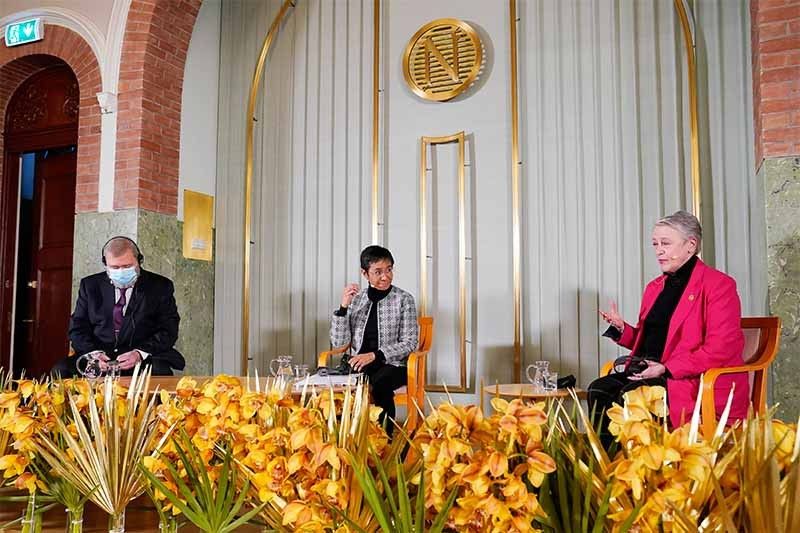 OSLO, Norway – She faces prison, he has buried several colleagues: Maria Ressa from the Philippines and Dmitry Muratov from Russia, two champions of the free press, will receive the Nobel Peace Prize for an attacked profession on Friday.

Ressa, co-founder of the Rappler news site, and Muratov, editor-in-chief of the independent newspaper Novaya Gazeta, won the Nobel Prize in early October for “their efforts to safeguard freedom of expression.”

Free and independent journalism, however, is under threat all over the world.

When asked if the prestigious award had improved the situation in the Philippines, currently ranked 138th for press freedom by Reporters Without Borders, Ressa replied Thursday that it had not.

“It’s like having a sword of Damocles hanging over your head,” the 58-year-old journalist said.

“Now in the Philippines the laws are there, but… you tell the toughest stories at your peril. “

She mentioned her compatriot and former colleague, Jess Malabanan, a Manila Standard reporter who was fatally shot in the head on Wednesday.

Malabanan, who also worked for the Reuters news agency, had reported on the sensitive subject of the country’s war on drugs.

If the murder turns out to be related to his profession, he would be the 16th journalist killed in the Philippines since Rodrigo Duterte took office in 2016, according to Reporters Without Borders.

Ressa, a fierce critic of Duterte and his murderous war on drugs, herself faces seven criminal charges in her country.

Currently on bail pending an appeal against a conviction last year in a cyber defamation case, she had to seek permission from four courts to travel to Norway for Friday’s ceremony.

Known for its investigations into corruption and human rights violations in Chechnya, Novaya Gazeta has seen six of its journalists killed since the 1990s, including famous investigative journalist Anna Politkovskaya murdered in 2006.

“If we’re going to be foreign agents because of the Nobel Peace Prize, we won’t get angry, no,” he told reporters when asked about the risk of being labeled as such by the Kremlin.

“But actually … I don’t think we’ll get that tag. We have other risks though,” added Muratov.

The label “foreign agent” is intended to apply to individuals or groups who receive funding from abroad and are involved in any type of “political activity”.

It was, however, granted to many journalists and media critical of the Kremlin, making their work extremely difficult.

Russian President Vladimir Putin has warned that the Nobel Prize is not a “shield” protecting journalists of this status.

“The report should not be fatal”

According to a report compiled by Reporters Without Borders up to December 1, at least 1,636 journalists have been killed around the world over the past 20 years, including 46 since the start of the year.

“Reporting on the news should stop being a deadly activity,” the organization’s secretary general Christophe Deloire said during the report’s presentation this week.

The number of journalists imprisoned around the world has also never been higher, the Committee to Protect Journalists said Thursday, with 293 currently behind bars.

The Nobel Peace Prize will be presented to Ressa and Muratov in a ceremony – reduced due to the pandemic – at Oslo City Hall on Friday at 1:00 p.m. (1200 GMT).

The prize consists of a diploma, a gold medal and a check for 10 million Swedish crowns (975,000 euros, $ 1.10 million) to be shared between the two winners.

This year’s other Nobel laureates in medicine, physics, chemistry, literature and economics would normally receive their prizes at a separate ceremony in Stockholm on Friday.

But due to the pandemic, they received their awards in their hometown earlier this week.

A ceremony will be held in their honor in the Swedish capital on Friday, in the presence of the royal family.

Maria Ressa fights for press freedom under Duterte in the Philippines