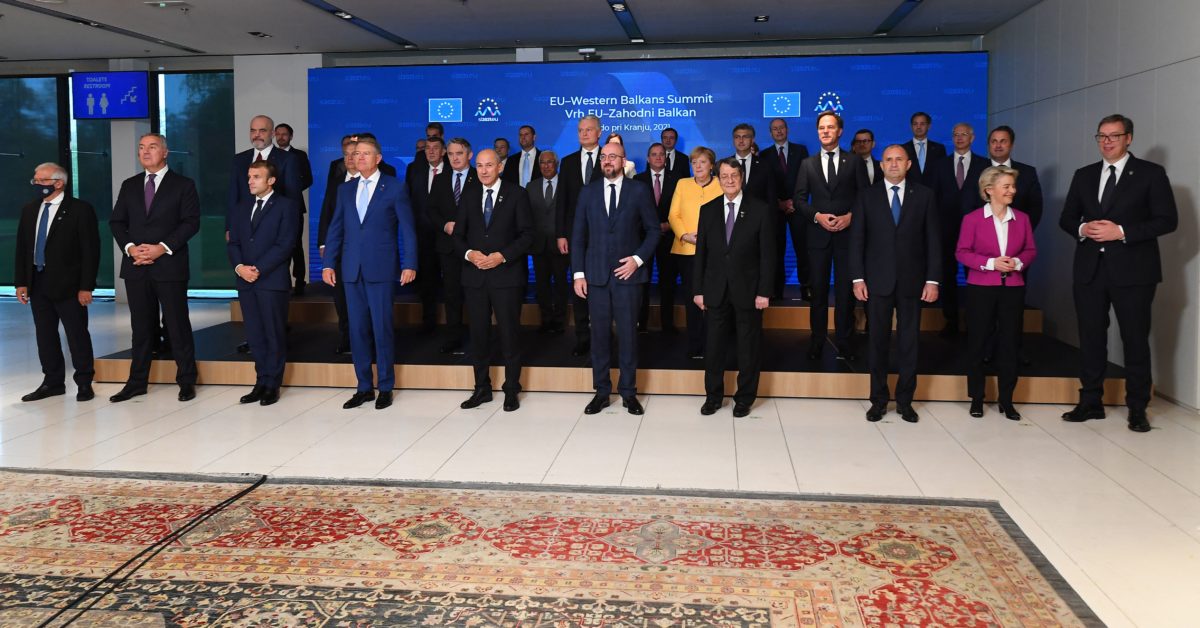 KRANJ, Slovenia – EU leaders spent Wednesday urging aspiring members to speed up democratic reforms – before answering uncomfortable questions about the erosion of press freedom within their own ranks.

European heads of state gathered in Slovenia for a summit on the Western Balkans, a territory comprising six nations one day seeking to join the EU. But it was the host country that found itself in the spotlight for its own alleged failures to uphold the democratic principles of the EU.

Alongside Slovenian Prime Minister Janez Janša, Commission President Ursula von der Leyen and Council President Charles Michel were questioned about the fate of the Slovenian News Agency (STA), whose staff members say it is on the verge of financial collapse because the country’s government has refused to provide legally mandated public funding.

Several local journalists appeared at the summit’s closing press conference wearing t-shirts displaying a message of solidarity with the STA. One confronted the three leaders.

For Janša, a right-wing populist whose government currently holds the rotating presidency of the Council of the EU, the question was about his increasingly controversial relations with the press. The Slovenian leader has been accused of stirring up hatred against the staff of the Slovenian public media and once referred to the STA as a “national disgrace”.

For EU leaders, the issue underscored their own struggle to protect journalists and media pluralism in some of their own countries.

In the end, the situation created a strange split screen. On the one hand, Janša defended the management of the STA by his government. On the other hand, von der Leyen criticized him. The two spoke as if the other leader was not standing a few feet away.

“These are internal games played against the government,” Janša insisted from her podium.

“We have repeatedly expressed our serious concerns about the lack of this funding from the Slovenian News Agency,” von der Leyen said from his own. Funding, she stressed, “is important for her independence.”

The deadlock frustrated Slovenian journalists. The STA has not received its funds for 279 days. The agency director resigned last week.

“The country which chairs the Council of the European Union fundamentally does not respect the principle of the rule of law,” said Mihael Šuštaršič, journalist at STA.

The Slovenian government has long argued that the issues surrounding the STA have no connection with press freedom.

“The problem of the Slovenian press agency does not concern its editorial policy,” he added.

However, the European Commission has chosen to defend the STA – at least rhetorically.

“We understand that under Slovenian national law it is the duty of the Slovenian government to ensure the independence and proper funding of the public service provided by the STA and that this was recently confirmed by the Slovenian Supreme Court” , wrote Jourová in the letter, seen by POLITICO.

The letter pleaded with the Slovenian government to provide funding to the STA.

“It is therefore important that Member States refrain from any attempt to directly or indirectly pressure the media, including denying the necessary funding,” Jourová wrote. “In this context, we urge you to find a quick solution to fund the STA in a way that would fully preserve its independence.”

The letter is part of a larger effort by the European Commission to protect journalists within the EU.

In September, the Commission unveiled non-binding media security recommendations for all EU countries. Von der Leyen also pledged to bring forward a new proposal, dubbed the Media Freedom Act, to better protect the independence of the media within the bloc.