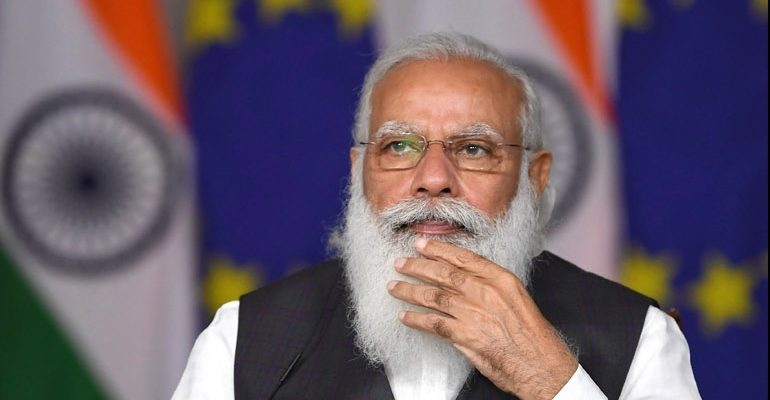 New Delhi: Prime Minister Narendra Modi is on the list of 37 heads of state or government that the global organization Reporters Without Borders (RSF) has identified as “predators of press freedom”. The entry against Modi notes how his “close ties to billionaire businessmen who own vast media empires” helped him spread his nationalist-populist ideology through continued coverage of his “extremely divisive and derogatory” speeches. .

India is ranked 142nd out of 180 countries in the RSF 2021 World Press Freedom Index. RSF is the world’s largest NGO dedicated to defending media freedom, considered a basic human right to be informed. and to inform.

Modi joins Pakistani Imran Khan, Crown Prince of Saudi Arabia Mohammed bin Salman, Burmese army chief Min Aung Hlaing and North Korean Kim Jong-un, along with 32 others who “violate the freedom of the press by creating a censorship apparatus, by arbitrarily imprisoning journalists or by inciting violence against them when they have no blood on their hands because they have directly or indirectly instigated journalists to be murdered.

This is the first time since 2016 that RSF has published such a list. Seventeen of the leaders identified as “predators” are new entrants. Thirteen of the 37 on the list are from the Asia-Pacific region.

Seven of the list’s world leaders have been on it since its first publication in 2001 and include Syrian President Bashar al-Assad, Iranian Ali Khamenei, Russian Vladimir Putin and Belarusian Alexander Lukashenko. The latter has gained credibility as a “predator” since the dramatic hijacking of a plane to capture the critic and journalist Roman Protasevich.

Sheikh Hasina from Bangladesh and Carrie Lam from Hong Kong are the two women identified as “predators”.

For each of the predators, RSF put together a file identifying their “predation method”, according to their press release notes.

The list also highlights how each “predator” censors and persecutes journalists, and their “preferred targets” – the types of journalists and media outlets they pursue, as well as quotes from speeches or interviews in which they “ justify ”their predatory behavior.

Modi’s entry notes that he has been a “predator since taking office” on May 26, 2014 and lists his “predatory methods” as “national populism and disinformation.” Its preferred targets, according to RSF, are the “sick” and “presstitudes”. The first is a word that the Hindu right-wing and supporters of Modi’s Bharatiya Janata party use to criticize “secular” views – a word which also appears in the preamble of the Indian constitution – and not ostensibly right-wing adhering to Hindus. . The latter is an amalgamation of “press” and “prostitute” – intended to indicate with the help of misogyny that Modi’s critical media is a capitulation.

Here’s how RSF describes Modi’s impact on the free press:

After becoming Chief Minister of Gujarat in 2001, he used this western state as a laboratory for the information and information control methods he deployed after being elected Indian Prime Minister in 2014.

Its main weapon is to flood the mainstream media with speeches and information tending to legitimize its national-populist ideology. To this end, he has developed close ties with billionaire businessmen who own vast media empires.

This insidious strategy works in two ways. On the one hand, visibly helping the bosses of the mainstream media, their journalists know that they risk being sacked if they criticize the government. On the other hand, the extensive coverage of his extremely divisive and derogatory speeches, which often amounts to disinformation, allows the media to reach record levels of audiences.

All that remains for Modi to do is neutralize the media and journalists who question his methods of division. To do this, it has a legal arsenal, the provisions of which constitute a major threat to freedom of the press. For example, journalists face life imprisonment on the extremely vague charge of sedition.

To complete this arsenal, Modi can count on an army of online trolls known as “yodha” (the Hindi word for “warriors”), who carry out appalling hate campaigns on social media against the journalists they dislike, campaigns that have almost systematically included calls for journalists to be killed.

The note also points out that the murder of journalist Gauri Lankesh in 2017 was a major casualty of Hindutva, “the ideology that spawned the Hindu nationalist movement that revere Modi.”

He also notes that women journalists such as Rana Ayyub and Barkha Dutt, who have criticized Modi, are facing harsh attacks, including doxxing and calls for gang rapes.

As a rule, all journalists or media who question the national-populist ideology of the Prime Minister are quickly labeled “sick” – a coat rack of “sick” and “secular” – and are targeted by the “bakht” , the faithful of Modi who are taking legal action. against them, defame them in the mainstream media and coordinate online attacks against them.

Recently, RSF had criticized the “absurd accusations” of “criminal association” leveled against Thread, Twitter India and journalists Rana Ayyub, Saba Naqvi and Mohammed Zubair in connection with tweets and reporting on an attack on an elderly Muslim man in Ghaziabad.