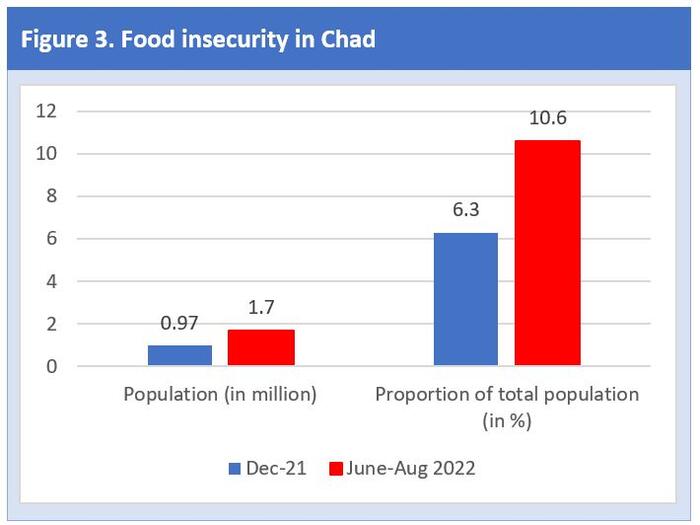 While Chad, a net oil exporter since 2003, saw its GDP per capita double between 1995 and 2014, since then it has lost about a quarter of its GDP per capita. A sharp drop in oil prices, climate change and increased insecurity and conflict aggravated by political unrest have contributed to this.

Driven by a two-month suspension of oil production at its Esso factories, disruptions in economic activity due to socio-political insecurity and liquidity constraints due to debt restructuring delays, Chad’s GDP fell contracted by 1.2% in 2021, the second consecutive year of recession. With the lifting of containment measures affecting national supply chains, inflation fell from 3.5% in 2020 to 1% in 2021. The number of people living in extreme poverty fell from 5.8 to 6.2 million people.

Chad posted a budget deficit of 6.7% of GDP (excluding grants) in 2021, as it increased public spending on security and in areas related to the political transition. Despite a significant increase in oil prices, realized oil revenue has been low, due to the one-year lag in the taxation of oil revenue. In addition, growing cash needs, partly due to increased political and security spending, and high levels of debt service relative to domestic revenue, have limited Chad’s ability to improve essential services and the provision of infrastructure. A successful process of debt restructuring under the common G20 framework would provide substantial relief by helping to restore sustainable fiscal balance.

Based on the results of the harmonized framework on the situation in October-December 2021, an estimated 970,000 Chadians are in acute food insecurity. 1.7 million are expected to be in this situation during the lean season from June to August 2022. Falling production, high commodity prices and disruption of supply chains have increased a state of vulnerability and need already public criticism. Food products are scarce in local markets. The government forecasts a cereal deficit of 291,000 tonnes for 2021/2022. The government announced on January 8, 2022 the ban on the export of cereals and groundnuts, except sesame, to combat food insecurity and, in collaboration with United Nations partners, launched a plan to humanitarian response of $510.9 million in 2022.

Inflation impacted households in 2020-21 and is expected to continue in 2022. A recent survey suggests that 20% of Chadian households experienced high food prices in the past three years prior to the 2018/19 survey . In addition, cereals are the most consumed food, with households devoting 29% of their food budget to these products. Simulations using 2018/2019 National Household Survey data, Consumer Price Index data and an estimate of the demand system suggest that inflation years 2020, 2021 and 2022 are associated with higher poverty rates. While households may have experienced an increase in income due to economic growth, their purchasing power has declined due to rising prices.

Chad is facing a deteriorating food security situation, particularly with the impact of the Russian-Ukrainian war. Most rural households depend on the agricultural sector for their livelihood. Agriculture’s share of GDP has declined over the past decade, from 42% in 2010 to 38.5% in 2019. The sector employs around three-quarters of the country’s workforce.

Chad’s three main export products are gum arabic, sesame seeds and cotton, although they represent only a small share of their respective world markets. Chad also has a strong revealed comparative advantage in sesame seeds and gum arabic, but the country needs to further develop its value chains to take full advantage of their potential. Farmers have increasingly shifted from cotton to sesame production. Livestock is a major source of income in the country. Yet the complexity of livestock value chains and insecurity in the region reduce producers’ earnings and the competitiveness of Chadian livestock.