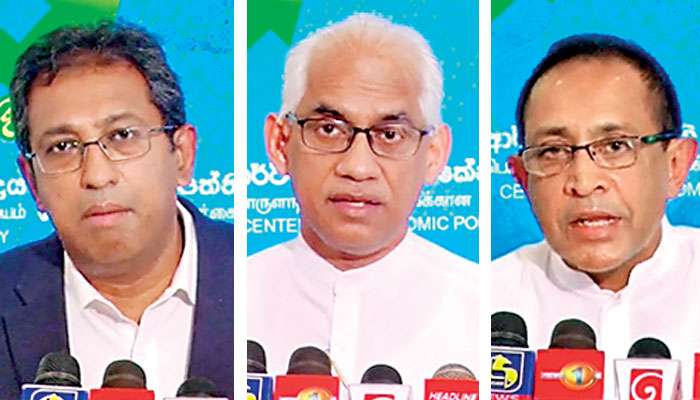 
The Samagi Jana Balawegaya (SJB) yesterday called on President Gotabaya Rajapaksa to engage in constructive dialogue with the opposition and all stakeholders to find a lasting solution to the economic crisis that is crippling the nation.

MP Dr. Harsha De Silva speaking at a press briefing yesterday said that neither the government nor the Central Bank seem to have a plan in hand to overcome the currency crisis and rising debt, and is mocked at the statements made by the Governor of the Central Bank, Ajith Nivard Cabraal. that there is no shortage of dollars in the country.

“The Governor of the Central Bank reiterates his factually incorrect statements to a certain newspaper that there is no shortage of dollars in the country. However, many other newspapers report the opposite.

In fact, one major newspaper said we need $20 million to clear 2,000 containers stuck at the port, while another says we are unable to import medicine because we are short of dollars.

Who is the central bank governor trying to fool? We are on the brink of an economic collapse due to a lack of dollars to import essentials such as medicine, powdered milk, fuel,

At the end of January, Sri Lanka had only $2.3 billion even with the currency swap with China, leaving itself with only $700 million in usable reserves. The country is in a precarious situation as it has to settle debt payments of $230 million this month, the MP said.

Joining the discussion, SJB MP Eran Wickramaratne, lamented that the government had taken the unprecedented step of imposing a 25% surcharge on ETH earnings. The opposition vehemently opposes this decision and has urged the government to withdraw the measure.

“Nearly 2 million employees are eagerly awaiting their EPF earnings upon retirement, which is why the Yahapalana government has decided to pay the elderly a maximum interest of 15%, in recognition of their contribution to the country,” said Wickramaratne.

He questioned why the government had not instead focused its attention on closing the investigation into the alleged bond scam and accused the Presidential Commission to Investigate the Bond Scam of recommending that surveys are carried out from 2002.

The president did nothing about the report, two years after his appointment and was swept under the rug, MP SJB charged.

The reports add that the EPF fund must be protected. Out of 142 investments made with Rs. 46.95 billion ETF funds, 98 projects had not received prior approval, he said.

Wickramaratne added that all discussions at the Central Bank are recorded, but when the commission asked for 1,163 records regarding EPF funds, only 265 records were made available and claimed that there were big incidents of misconduct. professional.

SJB MP Kabir Hashim said party leader Sajith Premadasa, in accordance with the rules, tabled several important questions on Tuesday on the state of the economy and reservations to be answered by the finance minister.

However, no member of the government could respond. He said the SJB chief’s questions related to the rise in money printing and food prices, the fall in foreign exchange reserves as well as the inclusion of pension funds for the 25% surcharge that the government diverted workers’ hard-earned savings.