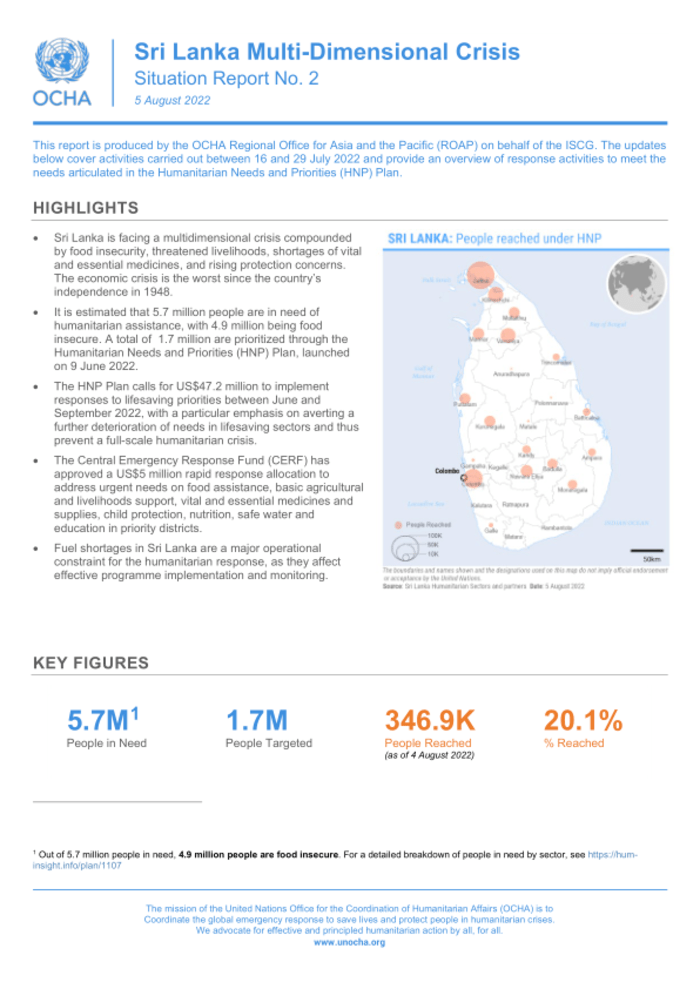 This report is produced by the OCHA Regional Office for Asia and the Pacific (ROAP) on behalf of the ISCG. The updates below cover activities carried out between 16 and 29 July 2022 and provide an overview of response activities to meet the needs set out in the Humanitarian Needs and Priorities Plan (HNP).

• Sri Lanka faces a multidimensional crisis compounded by food insecurity, threatened livelihoods, shortages of life-saving and essential medicines and growing protection concerns. The economic crisis is the worst since the country’s independence in 1948.

• The HNP plan requests $47.2 million to implement responses to life-saving priorities between June and September 2022, with particular emphasis on preventing a further deterioration in needs in vital sectors and thus preventing a large-scale humanitarian crisis.

• Fuel shortages in Sri Lanka are a major operational constraint for the humanitarian response, as they affect effective program implementation and monitoring.

Sri Lanka continues to experience an unprecedented economic crisis with high inflation, rising commodity prices, power shortages and lack of fuel. The crisis is compounded by a severe reduction in agricultural production caused by a failed agricultural transition. Following severe shortages of food, fuel, medicine and other essential items, mass protests erupted in March 2022. On July 13, the President of Sri Lanka left the country and the Prime Minister, in his capacity as interim president, declared a state of emergency.

In June, food inflation reached record highs of 75.8%. With less money and high prices for essential food items, families’ purchasing power has been greatly reduced. As a result, they resorted to less diverse and less nutritious diets. The needs assessment conducted in nine districts in June revealed that a large majority of households (85.1%) reported a loss of income since the start of the economic crisis and that 58% of households have lost more than half of their income. Vulnerable groups, such as female-headed households, are disproportionately affected by the crisis. Families would also resort to other negative coping mechanisms to cope, such as: 1) selling assets; 2) borrow money; 3) withdraw savings and 4) pledge property.

The loss of income is reflected in feeding practices, where 74% of households had to adjust their normal feeding practices. At least 56,000 children under 5 suffering from severe acute malnutrition (SAM) currently require ready-to-eat therapeutic foods. Pending the results of ongoing nutritional surveys, malnutrition has likely worsened and been exacerbated by the suspension of the national nutrition program since November 2021.

Incidents of sexual and gender-based violence (GBV) are reportedly on the rise, while the ability of government services to respond is severely affected. Service providers are running out of fuel for field and home visits and are currently only working two days a week. Many women’s shelters are short of space, and the police have limited capacity to investigate cases, as they are tasked with policing gas stations. Additionally, there is a lack of financial support for women and girls at risk of GBV.

The current crisis is impacting the schooling of children, already affected for two years by the COVID-19 pandemic. According to recent assessments in nine districts, more than half (55%) of households reported a negative impact on children’s education, while 33.9% of households struggle to help their children continue their education. Children are affected by increasing learning loss and school dropouts, especially among the most disadvantaged without immediate access to online learning, the urban poor and young children (pre-school and primary). Many schools are fully or partially closed, while fuel shortages continue to limit the ability of students and teachers to get to school.

About 80% of medical supplies in Sri Lanka are imported. Many life-saving and essential medicines and items, both in the public and private sectors, are out of stock. At the same time, the price of drugs has increased by 30% across the country. The functionality of the health system is further affected by energy crises and frequent power cuts. Water treatment services are also negatively affected due to lack of testing chemicals and reduced hours of water pumping. About 66.8% of households in the housing sector do not have access to drinking water sources.

Some fear that financial reform programs will be delayed until some level of political stability is achieved. At the same time, the limited functionality of government services hampers humanitarian operations, as many agencies partner with their government counterparts for their programming.

PRESS RELEASE: Statement from Texas Comptroller Glenn Hegar on investigation into Dallas-area club that may be responsible for sex-related commercial charges