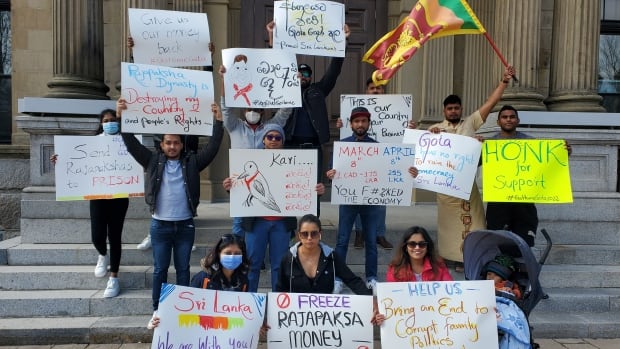 Some international students from Sri Lanka at the University of New Brunswick say recent events in their home country are very disturbing and have serious financial implications for them.

The island nation is experiencing its worst economic downturn since its independence in 1948.

There have been unprecedented food and fuel shortages, record inflation, power outages and massive protests demanding the president’s resignation.

“Here in Canada, we don’t know what to do, so we get really stressed day by day,” said Kaushal Rathnayake, a fourth-year doctoral student in biology.

“The country’s economy is declining very steadily and rapidly,” he said, “and people are going through a really tough time.”

Sri Lanka’s tourism-dependent economy has been hit during the pandemic, Rathnayake said, but things were going “very well” until the middle of last year.

Then the government made “reckless” and “unnecessary” tax cuts for large import and export companies.

Corruption is also believed to have contributed to the problem.

All of this led to a “heavy” deficit and Sri Lanka became unable to get money for imports or exports.

They see government mismanagement as the cause.

Despite “enormous oppression” from the government, he said, people took to the streets in droves day and night, demanding the resignation of the president and his family members.

“Our parents, friends and loved ones – you name it – everyone is on the streets right now. They are protesting against the government saying they can’t survive in this country.”

Their reasons for protesting are understandable, said Supun Weerasinghe, a fourth-year undergraduate business student at UNB.

A few months ago, everyone could afford food every day, he said. Today, with inflation around 17%, many people cannot afford basic necessities.

The electricity is out about half the time and there is no propane, which most households use for cooking.

Weerashinghe said he hopes officials will do what is necessary to put things right.

And with the Sri Lankan Rupee falling, it’s also hard to expect their parents to continue paying Canadian tuition fees.

“If they sent us 10 lakhs before,” Weerashinghe said, now they have to send more than 15 lakhs for the same amount in Canadian dollars.”

Also, the Sri Lankan government has put restrictions on sending money out, so even parents who have it cannot send it.

Rathnayake said he has friends from the University of Saskatchewan who are leaving Canada because they can no longer afford tuition.

UNB students get by, he says, by living together and pooling their resources. Most of them dropped out of part-time studies, he said, to cut tuition fees.

Weerashinghe said he had enough for daily expenses because he was working. But he is unable to earn enough to cover school fees.

The Canadian government prohibits international students from working more than 20 hours per week.

He hopes that the problem will be solved before the next semester.

Rathnayake hopes UNB and other universities across Canada will reach out to their Sri Lankan students to offer mental health resources as well as leniency if they experience financial hardship.

“These are tough times for these students,” Rathnayake said.

“Even a kind word counts.”

Foreign Ministry Spokesperson Zhao Lijian’s April 12, 2022 Press Conference_Embassy of the People’s Republic of China in the United States of America