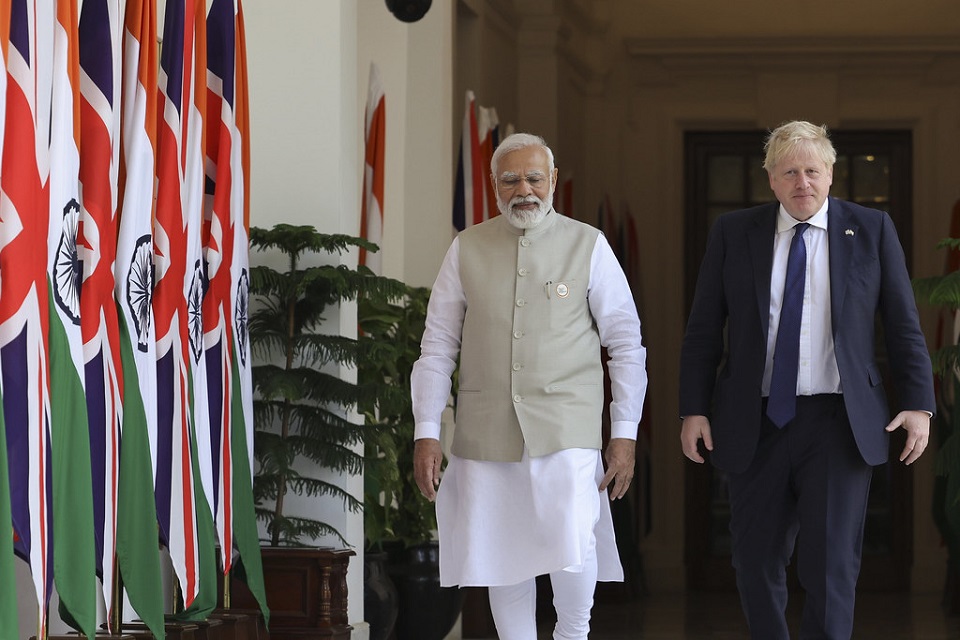 My friend, Prime Minister Modi, Narendra, my khaas dost – is the phrase I wanted in Hindi

And yesterday I became the first British Conservative Prime Minister to visit Gujarat, your birthplace of course, Narendra,

but, as you just said, the ancestral home of about half of all British Indians.

And I had an amazing reception – absolutely amazing – I felt like Sachin Tendulkar – my face was about as ubiquitous everywhere as Amitabh Bachchan.

I was everywhere to be seen and it was fantastic.

And this morning we had wonderful discussions and I think they strengthened our relationship in every way.

In difficult times, it is very important that we – the khaas dost – come together

What we are doing is pushing forward an ambitious ten-year roadmap for Anglo-Indian relations, which we agreed to last year.

It was great to see you at the G7.

But since then, threats of autocratic coercion have grown even more

and therefore it is vital that we deepen our cooperation,

including our common interest in keeping the Indo-Pacific open and free.

We have therefore agreed today on a new and broader partnership in defense and security,

which will not only forge closer ties between us,

but support your goal, Narendra from “Make in India”.

We agreed to work together to address new land, sea, air, space and cyber threats, including by partnering with new fighter jet technology,

maritime technologies to detect and respond to threats in the oceans.

We are expanding our partnership as scientific superpowers,

And building on the collaboration between Oxford/Astra-Zeneca and the Serum Institute,

who has vaccinated more than a billion people against Covid, – including me – I have the Indian jab in my arm and the power of good that it has done me thanks to India

And it helped India to become what Narendra called the pharmacy of the world.

Today we are launching joint initiatives on malaria vaccines,

On antimicrobial resistance and a digital partnership between the Indian National Health Authority and our NHS.

We are also making great strides together in energy security, helping each other reduce our dependence on imported hydrocarbons – and embrace cheaper, more sustainable local alternatives.

We have a new bid, a new plan to develop the Celtic Sea Offshore Wind in Dhanushkodi, we have a new hydrogen science and innovation center between the UK and India,

and we are advancing the Green Grids Solar Power Initiative that you and I launched, Narendra, at COP26 in Glasgow, along with 80 other countries.

It’s an incredible fact that the sun provides enough energy every day to power the world ten thousand times, you have a lot of solar energy here in India – the sun is giving a fantastic performance today and we have a lot of it in Great Britain too.

These partnerships form the superstructure of the living bridge that Narendra describes between our countries, and today that bridge is buzzing with goods and services, people and capital, going back and forth from east to west.

and sometimes it can be hard to tell if something is British, or Indian, or frankly Brindish.

On Wednesday I drove to the airport in a Range Rover – Indian-owned, but made in Britain.

And when I got here on Thursday, I visited JCB,

British owned, but made in India. Exporting 60,000 each year worldwide, 110 countries.

Or take the example of the Norton Motorbike being relaunched in Britain by an Indian company.

I am very happy that this visit has not only deepened our economic partnership.

We secured new deals worth £1 billion,

as well as in artificial intelligence, where India’s strengths are remarkable.

And perhaps most importantly for the long term, we make full use of the freedom we have now

an agreement where you can lift those tariffs – you can, India, Narendra, on our machines and our apples – in fact you’ve already done that on the apples so thanks for the apples

and we, in turn, can lift customs duties on your rice and textiles.

We have already closed four chapters,

and ensuring mutual recognition of higher education qualifications in the UK.

And as the next round of talks begins here next week,

we say to our negotiators: do it for Diwali in October. Have it done by Diwali.

the widening of this living bridge into a multi-lane highway – the circulation of beautiful electric vehicles manufactured jointly and the creation of hundreds of thousands of new jobs in our two countries.

As India celebrates 75 years of independence,

I am filled with optimism about the years to come and the depth of friendship between our countries, and the security and prosperity that our partnership can bring to our people for generations to come.