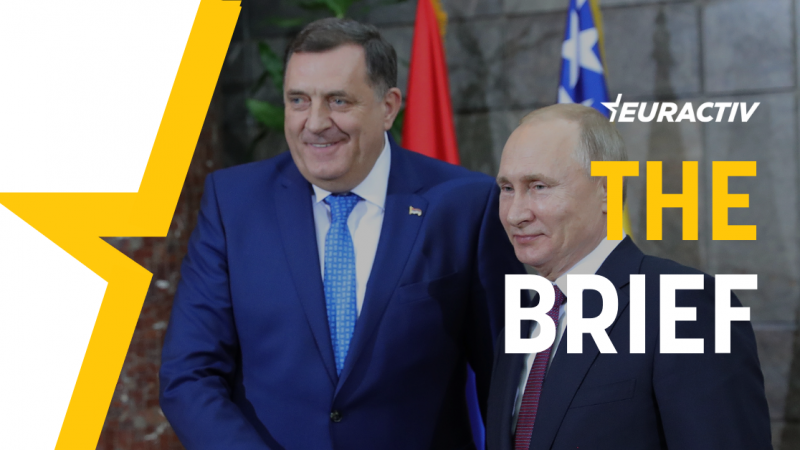 The Brief, powered by Goldman Sachs – Bosnia crisis and failure of stability – EURACTIV.com

The National Assembly of the Republika Srpska (the Serbian half of post-war Bosnia and Herzegovina) voted last Friday to withdraw its autonomous entity from Bosnia’s armed forces, judiciary and tax system. The assembly said the RS government should come up with laws to regulate these issues at the entity level within six months.

The move plunged the country into possibly the most serious crisis since the Dayton peace accord ended the war between Bosnians (Bosnian Muslims), Croats and Serbs in 1995.

The proposal, which has no direct legal effect, is the first step towards secession and was adopted by 49 votes in favor out of 83 deputies. The largest opposition parties did not attend the vote, but many were likely to vote against.

There is no doubt that Milorad Dodik – the Serbian strongman in the tripartite presidency of BiH and the most vocal champion of secession from the RS – will not build a Serbian army capable of starting a war, simply because of the lack of money. In addition, a war would harm its business interests. Its patrons in Belgrade and Moscow do not need to go to war either.

The real threat is RS’s attempt to spoil BiH funding. The International Monetary Fund was particularly concerned about the potential withdrawal of the RS entity from the Indirect Tax Authority (ITA) of Bosnia and Herzegovina.

According to the IMF, the ITA is one of the most successful institutions in Bosnia and the indirect taxes collected by the agency are the most important source of revenue for the multiple governments of Bosnia and Herzegovina.

As previously stated, opposition forces in the RS share Dodik’s vision. Mirko Šarović, leader of the Serbian Democratic Party, founded by war criminal Radovan Karadžić, said it was legitimate to ask for more powers, but it was unreasonable to risk a conflict with NATO.

The internal political struggles in Republika Srpska are clearly a matter of power and not of principle, and Dodik is the one who manages the dynamics.

Serbian President Aleksandar Vučić, one of Dodik’s patrons, can stay on the sidelines for the time being, using his own problem with mass protests in Serbia against lithium mining as an excuse.

Russia, as another patron of RS, is undoubtedly behind Dodik. As Ukraine talks enter a crucial phase, Vladimir Putin could use BiH as a bargaining chip and show the West that it can destabilize the Western Balkans whenever it wants, not necessarily by using gas .

Putin’s strategy is to keep non-EU members in the region out of the bloc, and he has different instruments in most cases.

Serbia is constrained by energy, Montenegro by the Orthodox Church. In BiH, it’s Dodik, or the one who succeeds him, which discourages the EU from any ambition. North Macedonia is a special case; it is forced because the country shows little interest in solving its bilateral problem with Bulgaria, a neighboring member of the EU.

In Albania, the Russians have little influence, but the United States, many of whom believe to reign supreme there, lobbies for EU membership on a daily basis, often ignoring glaring problems in the country. Rule of law and democracy.

The latest developments in Bosnia show the failure of Western strategies, which have prioritized the perceived stability provided by leaders such as Vučić in Serbia or Djukanović in Montenegro.

However, this “stability” has had too many drawbacks, one of them being economic and social stagnation, which leads to instability and opens the door to other geopolitical actors.

The other downside to stabilocracy is that it creates puppets like Dodik, which sometimes get out of hand.

For more than 20 years, stability has been the dominant feature of US and EU policy in the region, but it was wrong and failed. Above all, it created autocracies and opened the door to outside influences.

After so many young people and graduates have left the region, is there still room for democratization, Europeanization of the Western Balkans? The authors of this Brief are skeptical.

Find out how we can achieve net zero carbon with Carbonomics – our research that models the net zero cost curve across multiple industries. Click here >>

Germany’s new government on Monday passed a supplementary budget to supercharge its climate and transformation fund with a injection of 60 billion euros financed by debt to allow more investment in the transition to a green economy, officials said. The budget compromise allows the new German Minister of Finance and leader of the FDP, Christian Lindner, to consider a return to the debt brake rule from 2023 and to authorize ever more public investments necessary to reduce carbon emissions in Europe’s largest economy.

During this time, New German Transport Minister Volker Wissing has raised question marks on the country’s late transition to clean mobility. Given the very different approaches to reducing emissions in the sector, the three parties due to form the new government presented a coalition agreement that has been widely criticized for its lack of a coherent strategy for the transport sector.

‘Brain drain’ has become a sad refrain in the Western Balkans, where many young people dream of living and working abroad. Across the region, the expression reflects the way in which thousands of young people, in general, settle in EU countries to continue their education or work. But Janos Ammann, Economics Writer at EURACTIV.com, isn’t convinced that this is necessarily a bad thing.

The European Commission and Member States must reduce the administrative burden on small and medium-sized enterprises (SMEs) in the food sector, according to conservative EU parliamentarian Marlene Mortler.

The views are those of the author.