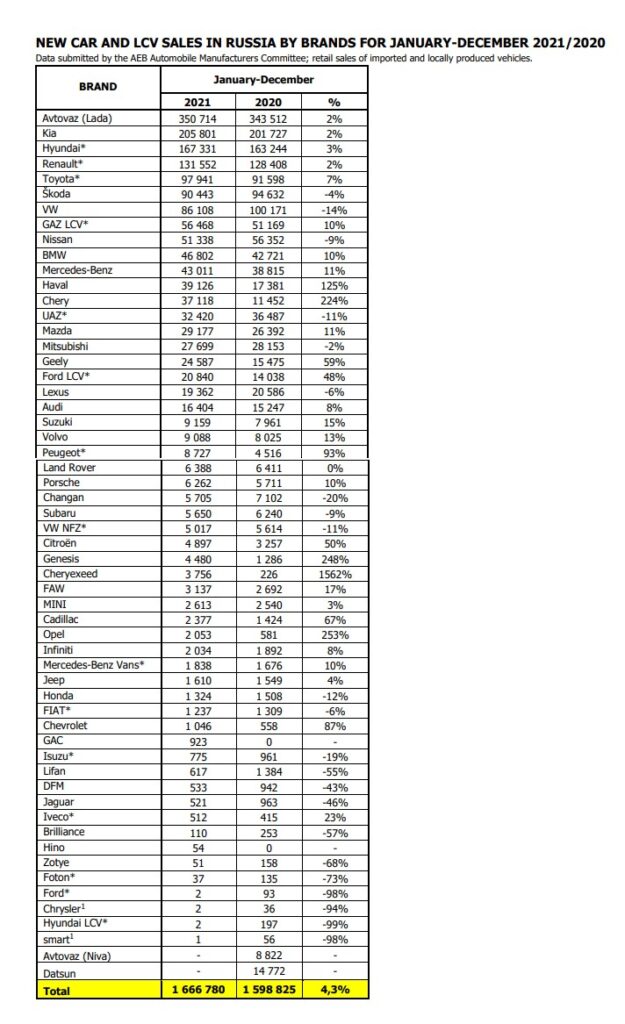 The crisis in Ukraine creates risks for the automobile

As the geopolitical crisis in Ukraine intensifies, the Ukrainian automotive market could feel the effects, as the situation seems to have deteriorated seriously over the past few weeks.

A buildup of Russian military forces near the border has led to rising tensions and raised fears of a wider conflict far beyond the ongoing skirmishes between the Ukrainian military and pro-Russian rebels in the Donbass region of the eastern Ukraine. The Russian government’s decision to recognize breakaway provinces in eastern Ukraine significantly ups the ante as it provides a possible pretext for Russian forces to cross the Ukrainian border on a ‘peacekeeping’ mission. . This would likely provoke more sanctions from Western governments, while increasing the dangers of a larger, longer and more extensive military conflict inside Ukraine. In addition to the serious consequences for the two countries concerned, the crisis also raises concerns about the international economic impacts and the associated uncertainties.

Economic impacts will potentially include sharp reversals for the economies of Ukraine and Russia as well as broader indirect effects on the global economy – through higher energy prices, for example. The results will ultimately depend on the trajectory and duration of the geopolitical crisis, but a look at the automotive data gives an indication of the immediate risks for the sector.

The Ukrainian car market has been depressed for some time now

According to GlobalData, Ukraine’s economy and light vehicle (LV) market were first decimated by the global financial crisis and then by the economic collapse caused by Russia’s annexation of Crimea in 2014. a peak of 664,000 in 2008, demand for cars has collapsed. to 167,000 in 2009 and after a slow recovery just above the 200,000 threshold, it fell to a low point of just 50,000 in 2015. Since then, the recovery has been long and painful. An embryonic revival was snuffed out by the global pandemic in 2020, but in 2021 Ukraine was one of the few countries to achieve strong growth despite the global shortage of semiconductors, with demand increasing by 23%.

Light vehicle production activity in Ukraine is limited to a handful of SKD (semi-knocked down) kit assembly operations which accounted for just over 7,000 cars in 2021. In 2008, BT’s Ukrainian production increased exceeded 400,000, but since Ukrainian producer AvtoZAZ stopped building its own brand of cars a few years ago most attempts to set up assembly operations have ended in failure. Ukrainian assembler Eurocar is still building Škoda models for the local market (3.5k in 2021) and AvtoZAZ is currently assembling a range of Lada and Kia badged cars just to get around the ban on importing Russian-built vehicles. There are few indications that Ukraine can expect to attract significant investment in its automotive industry in the near term.

By contrast, aided by a population of 146 million, the Russian BT market offers greater potential having peaked in 2012 at 2.94 million units, although expectations that it was to become the largest light vehicle market in Europe, overtaking Germany, have not been satisfied. . Hit by the fallout from the annexation of Crimea in 2014, sales collapsed in 2015 and continued to fall, hitting a low point of 1.43 million in 2016. Since then, government incentives have somewhat supported the market , but sluggish economic growth and disappointing real growth. income growth has held back progress. COVID-19 caused further disruption in 2020, with demand once again falling below 1.6 million. In 2021, demand for personal transport has strengthened amid the global pandemic, but supply constraints, due to component shortages, mean the recovery has been much weaker than it might have been. to be otherwise. BT sales totaled 1.67 million over the year, +4% compared to 2020 but still nearly 1.3 million below Russia’s all-time high.

The inability to deliver the kind of volume growth promised 10 years ago, combined with onerous local content requirements and a difficult regulatory environment, led some global OEMs, which had invested in Russia, to decide to cut their losses. GM scaled back operations in Russia from 2015, closing its St. Petersburg assembly plant. Ford closed its car assembly plants in 2019, although the Transit is still built in Russia with a local partner. The challenges associated with expanding export sales – particularly beyond the immediate CIS markets – have made the failure of the Russian market to achieve growth critical. More than 2 million light vehicles were built in Russia in 2012, but after the local market crisis, growth has been elusive and less than 1.5 million light vehicles rolled off Russian production lines in 2021.

Renault will watch a little nervously

It’s often little more than a footnote in Renault-Nissan-Mitsubishi Alliance reports, but Russian domestic giant AvtoVAZ is effectively owned by Renault through a 69%-32% JV with Rostec. . Economic sanctions against Russia could impact the supply of imported parts, including semiconductors from Asia. However, the Russian economy has generally been pushed towards greater self-sufficiency by the sanctions in place since Russia’s annexation of Crimea in 2014. AvtoVAZ has always operated at a high level of vertical integration and most parts parts are of national origin. Recent comments allegedly made by AvtoVAZ CEO Nicolaus Maure indicate that the company is preparing and studying alternatives in case of possible supply disruptions. It is not impossible that a high-level political agreement or agreement has been reached with China as an alternative source for certain critical supplies in the event of supply difficulties.

AvtoVAZ will also be concerned about the sluggish domestic economy and market. Some economists have noted that while the sanctions will no doubt hurt the Russian economy, there is a resilience factor in the high foreign exchange reserves of Russian banks, as rising energy prices provide a boost. thumbs up to Russia’s huge energy sector.

Data, insights and analysis delivered to you
See all newsletters
By the Just Auto team
Subscribe to our newsletters

A look at AEB’s BT sales data for the year 2021 offers an indication of the volume risk of the Russian market by OEM.

A series of EU and US sanctions against Russia have been in place since 2014 and other measures – mainly affecting the financial, energy and defense sectors – have been introduced in protest against Russian equities, most recently following the attack on Alexei Navalny in August 2020. 2019 – it is difficult to disentangle the impact of the sanctions of the fall in the price of oil over the period. It is also true that Russia has managed to put up some resistance to the threat of new sanctions. Since 2014, it has amassed a significant currency cushion and now has a national wealth fund of over $182 billion, or almost 12% of GDP. Tensions are driving up the price of oil, which is now around $100 a barrel.

New US and/or EU sanctions could include restrictions on the Nord Stream 2 gas pipeline (Germany says it will no longer be ‘certified’), cutting off Russia from the international payment system SWIFT, restrictions on large banks, entities and individuals (including Vladimir Putin). They could also involve banning exports of key products to Russia such as semiconductors, a move that would no doubt impact vehicle production. GAZ Group has been under threat of sanctions since 2018 but could potentially be denied access to suppliers as the United States increases pressure on the Russian LCV producer.

In the best-case scenario, if the situation deescalates and some form of settlement is agreed, the Russian light vehicle market could still see growth in 2022, albeit at a slower pace than in 2021, when it increased by +4.3% year-on-year. . Risks to this outcome already exist due to ongoing component shortages and associated production shutdowns, while Russia faces record COVID-19 cases as omicron variant spreads, albeit with significant restrictions are not currently planned. A worst-case scenario foresees further pressure on the rouble, prohibitive interest rate hikes, significant price increases, a collapse in consumer confidence and the risk of a severe disruption in the supply of components and vehicles of Russia. Sales could fall to 1.1-1.3 million units, a reduction of up to 35% year-on-year.

Russian production could also increase further in 2022 if a full-scale military conflict is averted, especially as export demand has picked up lately. Only 81,000 PV were exported by Russian OEMs in the first 11 months of 2021, but this figure increased by 39% year-on-year. From 2022, export growth is expected to be supported by Stellantis’ decision to start exporting vans from Russia to Europe, Latin America and Africa. Although expectations are modest for 2022 at less than 10,000, at least 40,000 are targeted for 2023. Such supply plans could be subject to change unless tensions improve. However, Stellantis as well as most of the other players still present in Russia have been there for quite some time and have already been through a succession of crises.

Given that the Ukrainian market is still relatively small at 115k in 2015, volume risks are quite limited. In the worst case, in the event of a large-scale Russian military incursion, demand would fall to 40-50,000 in 2022, a drop of 65-75,000 units. Renault-Nissan-Mitsubishi, which represented 24% of sales in 2021, is the most exposed to this risk, followed by the Toyota and Hyundai groups.

Ukrainian assembly volumes are low (7.3k in 2021) and therefore the risk of lower production is limited. In the event of a military incursion, supplies of kits, notably from Russia of cars badged Lada and the Kia Rio would most likely be greatly affected.

While the relatively small Ukrainian market is almost exclusively dominated by imports, mainly from the EU and Japan, more than 80% of Russian vehicle sales came from local sources last year. Only 7% of Russian sales were imported from the EU, 3% from Japan and 3% from China.