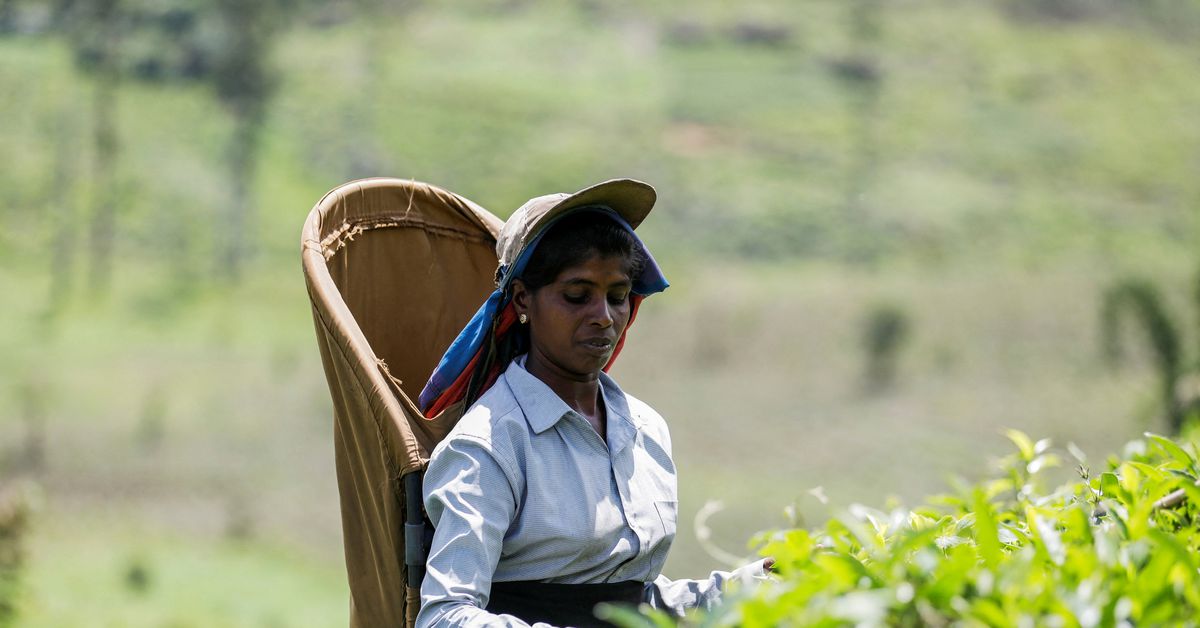 BOGAWANTALAWA, Sri Lanka, May 5 (Reuters) – On a lush plantation in Sri Lanka, Arulappan Ideijody deftly plucks the tips from each tea bush, tossing them over his shoulder into an open basket on his back.

After a month of picking more than 18 kg (40 lb) of these tea leaves every day, she and her husband, Michael Colin, 48, receive around 30,000 rupees, worth around 80 dollars after the island nation has devalued its currency.

“It’s not enough money,” Arulappan, 42, said of their earnings, which have to support the couple’s three children and elderly mother-in-law.

“Where we used to eat two vegetables, now we can only afford one.”

She is one of millions of Sri Lankans reeling from the island’s worst economic crisis in decades.

The COVID-19 pandemic has cut off the tourism lifeline of the Indian Ocean nation, already short of revenue following the government’s steep tax cuts.

Plantation workers like Arulappan, who are mainly drawn from the island’s Tamil minority, are more affected than most because they do not own land to provide a cushion against soaring food prices.

His family is one of 17 people living in traditional “line houses”, or single-storey, box-like terraces whose design has not changed since the days of British colonial rule, which ended in 1948.

The emerald green hills stretch for miles around, while the fragrant wood smoke of the burning tea branches that families use for their cooking fires rise above the cottages.

Their fortunes reflect the rise and fall of an economy that emerged from a decades-long civil war in 2009.

Buoyed by a booming tourist industry and exports of items such as clothing and plantation products like tea, rubber and cinnamon, Sri Lanka has achieved a GDP almost double that of neighboring India. in 2020.

Arulappan left school at 14 and worked in a garment factory before marrying and moving to the plantation in Bogawantalawa, a valley in the central highlands famous for its fine teas and about a four-hour drive to east of Colombo, the commercial capital.

The job’s flexible hours allowed her to care for her children and start a small business selling vegetables to other workers on credit.

But the pandemic has been a setback for the family and the country, shutting down the economy for months and cutting off the tourism sector, a key source of foreign currency.

“There were days when we only ate rice,” Arulappan said.

The tea industry, which supports hundreds of thousands of people, also suffered last year from a controversial government decision to ban chemical fertilizers as a health measure. Although later reversed, the ban left fertilizers in short supply.

Tea production in the first quarter fell 15% on the year to its lowest level since 2009, with the Sri Lanka Tea Board saying dry weather had taken its toll on bushes that had not received enough water. fertilizer after the ban.

The crisis has prevented Arulappan from making repayments for the past two months on a series of high-interest loans she took out to start her business, cover the costs of a family wedding and pay off other debts.

Food inflation is approaching 50% for the year, with transport almost 70% more expensive, according to official figures, although in practice the figures are even higher.

The price of flour has doubled over the past year, putting many plantation workers out of reach of the coconut-infused flatbreads they munch on while picking tea.

“We had to switch to eating rice. But even that is very expensive now,” Arulappan said.

The cost of the two-mile bus ride to school for her two young children has also more than doubled in recent months, but the couple continue to pay for private lessons to ensure a better life for them.

“I never want to see my kids working on a plantation,” Michael said.

However, the crisis doomed the university plans of their eldest son, Akshon Ray.

Arulappan saved for two years for a laptop she promised the 22-year-old if he performed well in his final exams.

Above the family’s metal cupboard is a folder containing the brochure of the university where he planned to study. But the financial burden was too heavy.

“You have to support the family,” Arulappan told his son just before he left to work in a broom factory in Colombo.

She does not yet know where he is staying.

Reporting by Alasdair Pal and Uditha Jayasinghe in Bogawantalawa; Editing by Clarence Fernandez