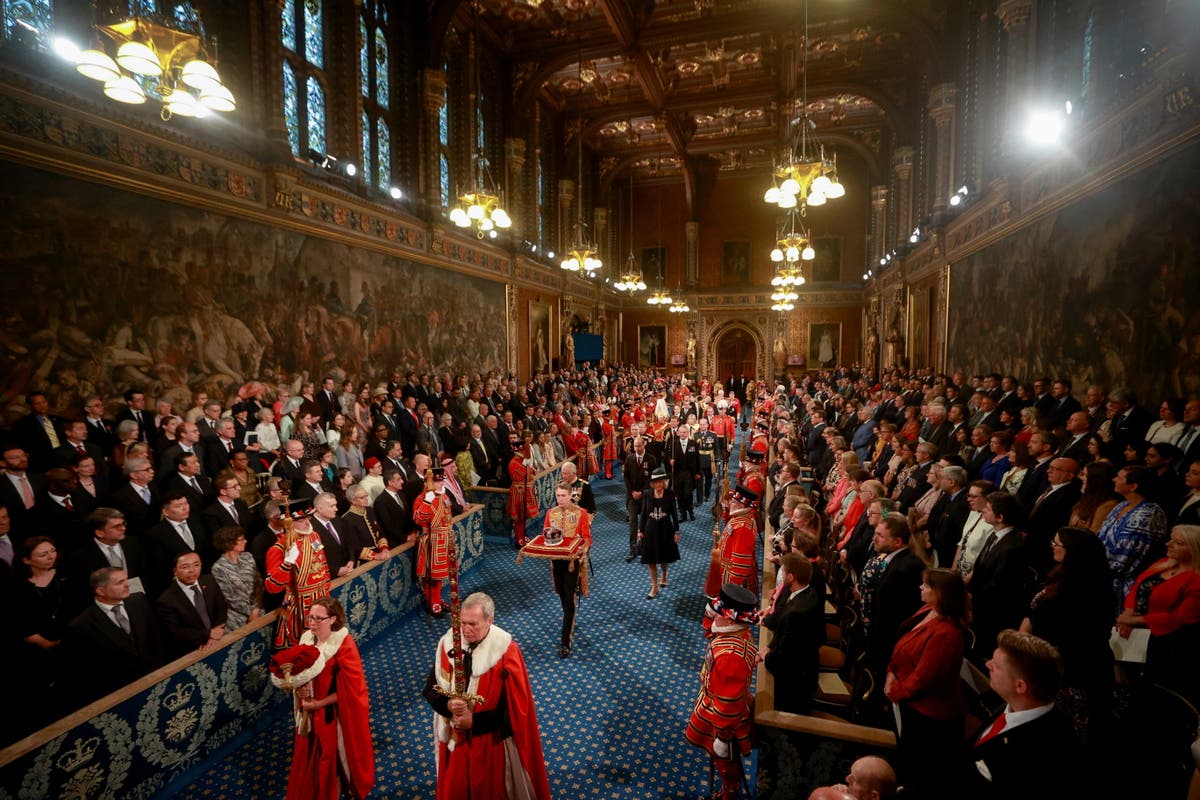 The grand and ceremonial event that is the official opening of parliament, with its pomp, opulence and display of power and influence, has never seemed so removed from the lives of ordinary people.

The hallowed halls of the Palace of Westminster, creaking with heavy processions and draped with acres of red velvet and gold brocade, are millions of miles away from the increasingly frenetic and frightening battles that millions of us now fight daily just to keep your head above water. .

However, it would be a mistake to dismiss yesterday’s ceremony as just an isolated and archaic point of tradition.

The Prince of Wales’ speech – a brief gallop through the 38 different legislative bills that will be considered by the Houses of Commons and Lords in this next parliamentary session – was drafted by the government.

It was a forensic atmosphere for debates whose results will influence all aspects of our lives.

It was never going to be a budget. Although the now suffocating cost of living crisis was at least mentioned in the very first sentence, there were no details to ease the fears of households across the UK.

But, complained opposition politicians, no urgency was expressed. There have been no revelations about emergency budgets for example (at least not yet), only an attempt to manage our expectations of how little the government can do to curb inflation – which should reach at least 10% this year and stay high for some time.

There is no doubt that the economic difficulties in which we now find ourselves – both individually and as a nation – are based on the unprecedented, broader and consequential circumstances of the pandemic and the invasion of Ukraine. .

But the government’s decisive response to the former has created space to wonder why more action is not being taken to mitigate the impact of the latter. Indeed, as MPs settle in to ponder where we are going on earth, calls for windfall taxes, VAT cuts and sustainable action (in every way) on energy bills are mounting. .

So what do yesterday’s events tell us, what to expect and most importantly, will it help us out of this crippling crisis?

Many of the bills mentioned look frustratingly like housekeeping, as if our leaders are sweeping the edges of a personal financial crisis in an effort to help contain everything a bit more, or even clear it up.

But two pieces of legislation – the Financial Services Bill and the Economic Crimes Bill – probably shouldn’t be dismissed as personally irrelevant as we seek more immediate reassurances about day-to-day tensions.

“The Economic Crimes Bill will be key in helping to tackle money laundering and the growth of fraud and scams, which are now the most prevalent type of crime in the UK. This Bill should focus on measures that prevent fraud in the first place and provide greater enforcement powers to tackle those who commit economic crimes.

This is important given the increasing risk of losing money we cannot afford due to scams. Just yesterday, Britain’s cybersecurity agency revealed that it removed a record number of online scams in 2021, four times as many as in 2020.

Individual banks have also reported similar massive increases in other types of fraud, such as the recent TSB revelation that identity theft fraud cases have increased by 300%.

And while there are measures in place to return money lost to victims of fraud, thousands continue to fall through the loopholes for reasons ranging from personal embarrassment to institutional ambivalence.

Crucially, the Financial Services Bill will allow the financial regulator to compel banks to reimburse victims of authorized push payment fraud – which occurs when scammers convince victims to authorize payments by deception.

The bill will also attempt to protect access to cash, used in particular by vulnerable and marginalized people.

Meanwhile, Lisa Laybourn, head of technical policy and regulation for financial wellness organization The Investing and Saving Alliance (Tisa) highlights the importance of the online safety bill as a also a crucial element in the fight against fraud.

“We are spending more and more time online. Simultaneously, the burgeoning online advertising ecosystem means we need a regulatory framework that is both fit for purpose and agile enough to keep pace with a rapidly changing environment,” he said. she.

“It is significant that consumer confidence in scam prevention measures has increased in the Queen’s Speech. Failure to do so could jeopardize the uptake of vital new digital tools such as the Pension Dashboard. »

But, she adds, “Legislation needs to be flexible enough to easily adapt to the evolution and sophisticated activity of scammers.”

Others reacted with relief to the inclusion of the Tenant Reform Bill, while the lack of plans to tackle pension under-savings worried those in the pensions industry.

But really, the bill we wanted to hear about was the one that had barely been considered – energy bills.

While the fall is set to deepen the affordability crisis by at least £600 in energy bills (before we approach the impact of runaway inflation on household costs), it there was nothing to offer struggling households.

“There was a brief mention that the government would prioritize helping lower the cost of living for families, but no actual bills have been announced outlining how,” said analyst Sarah Coles. principal of personal finance for Hargreaves Lansdown. “This is likely to fuel ongoing rumors of a potential emergency budget.”

The only energy bill that has been mentioned is the government’s plan for the transition to green energy which, together with plans to boost the adoption of the heat pump, for example, should cover the future capping energy prices beyond next year.

The reality, however, is that next year is a long way off for households who don’t know how they’ll pay their next bill, not to mention the millions who cringe at the thought of turning the heat back on in the fall, just time for that next hike.

Somewhat alarmingly, much of the energy bill debate so far has focused not on cutting costs, but on finding ways to raise bills more steady rather than in large jumps.

The millions of UK households already struggling need a lot more support here in the real world than that, and fast.

Live from Turin: press conference of the finalists of semi-final 1