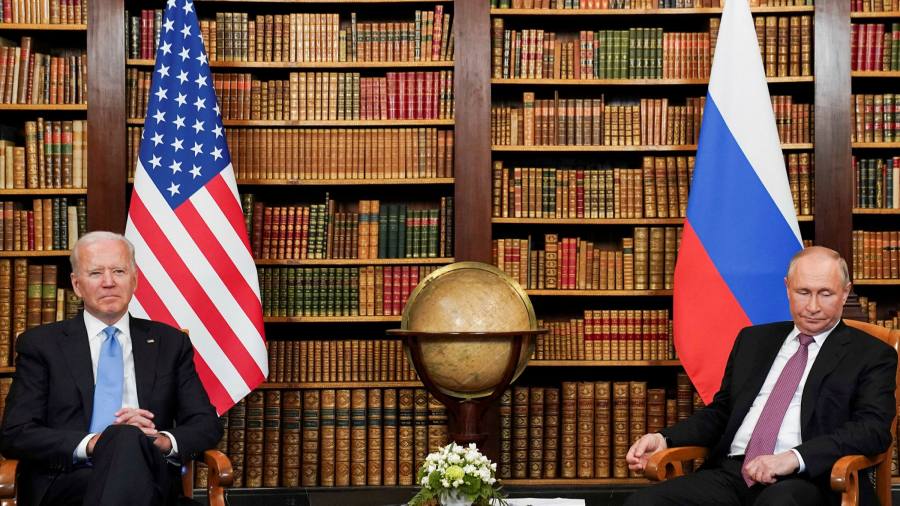 For much of his first year in office, Joe Biden’s foreign policy focused on the United States’ increasingly fierce competition with Beijing – so much so that critics accused the president of allowing the China to blind its team to other latent international crises, such as Afghanistan and Iran.

Vladimir Putin, however, made sure that he was not among the ignored. By amassing tens of thousands of troops on the Ukrainian border, the Russian president has forced the White House into what experts in the region see as a rush to formulate policy on the fly.

“This is becoming the worst crisis in Europe since the end of the Cold War,” said Andrew Lohsen, a member of the think tank Center for Strategic and International Studies.

For Biden, the clash with Putin presents a particularly thorny challenge, one that pits his long-held goal of aggressively confronting foreign autocrats – a stark reversal, according to his team, of his predecessor’s tendency to pamper them – with the more practical objective of avoiding a war.

This is not the first time that Biden’s foreign policy instincts for zealously defending young democracies in the former Soviet sphere have come up against Putin’s apparent willingness to use military force to reaffirm Kremlin rule in the region, forcing it to compromise its pro-democratic principles.

Are [Moscow’s proposals] an ultimatum and a prelude to war, or are they designed to intimidate us and give us what Russia would otherwise have to wage a war to win?

Over a decade ago, as chairman of the Senate Foreign Relations Committee, Biden flew to Tbilisi as Russian troops invaded Georgia, vowing never to “abandon this young democracy.”

A year later, as vice president, Biden was sent back to Tbilisi by Barack Obama to inform the Georgian government that Washington would in fact not provide him with defensive weapons – a change in position that infuriated the Georgian president for the time, Mikheil Saakashvili.

Critics argue that Biden has now made a similar calculation since becoming president, abandoning his pro-democracy policies to engage with bad Kremlin players.

Rather than face Putin directly at the start of his presidency, for example, Biden hosted a high-level summit with him in Geneva – months before Volodymyr Zelensky, Ukraine’s pro-Western president, received a visit. in the Oval Office.

As the situation in Ukraine deteriorated, the White House has expressed willingness to discuss Russian grievances, even though some of them, like NATO’s expansion to the East, are seen in Washington as a settled story that can never be unraveled.

Michael McFaul, a former US ambassador to Russia who worked alongside Biden in the Obama White House, said the current administration “chooses between bad and worse results” when it comes to s ‘engage with Russia.

For its part, the White House insists that there will be grave consequences for Putin if he follows through with his saber strikes by invading Ukraine.

On Thursday, a senior US official reiterated that the Biden administration would pronounce “massive sanctions” against Russia in the event of an invasion, as well as increased defensive aid to Kiev and NATO allies in central Europe and eastern.

“We and our allies are ready to inflict serious damage on Russia’s economy and do exactly what it says it does not want: more NATO capabilities, not less, and closer [geographically] in Russia, no further, ”said the American official.

Yet the prospect of US engagement with Russia has sounded alarm bells in Europe. Biden was forced to reassure Zelensky earlier this month of Washington’s “unwavering commitment” to Ukraine’s territorial integrity, and Antony Blinken, Biden’s secretary of state, said of many of Russia’s demands were “very clearly unachievable”.

U.S. officials have also been asked to publicly state that they intend to include European allies in European security talks.

Among Russia’s demands is NATO’s pledge to stop admitting allies from the former Soviet Union – Ukraine and Georgia were promised membership in a NATO summit in 2008 – and that the alliance seek Moscow’s consent to deploy troops to former members of the Warsaw Pact, most of whom are now in NATO.

It also demands that the United States pledge not to set up bases in former Soviet republics or join forces with their armies, and that Moscow and Washington keep their bombers, ships and missiles out of reach. from each other.

The United States has said it will engage in diplomacy with Moscow as early as early January, but the agenda will be broader than the proposals released by Russia.

Daniel Fried, who helped lead the US response to Russian-Ukrainian issues at the Obama State Department, said Moscow’s proposals were “not serious negotiating documents,” but said he was always worth engaging with the Kremlin.

Fried added: “The question is, ‘Are they an ultimatum and a prelude to war, or are they designed to intimidate us and give us what Russia would otherwise have to wage a war to win?’ I do not know the answer. But the fact that I am asking this question is unpleasant.