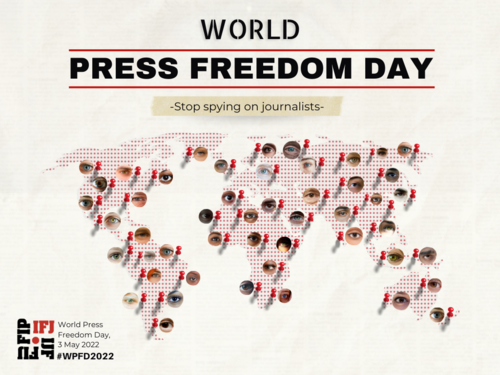 Many IFJ affiliates are taking action to mark World Press Freedom Day on 3 May. Here is a non-exhaustive list of their initiatives.

Cambodia: CamboJA, in collaboration with UNESCO and other CSO partners of the World Press Freedom Day Working Group, will organize a face-to-face debate on World Press Freedom Day to discuss and better understand the potential impact of restrictive legislation on fundamental freedoms, including the sub-decree establishing the National Internet Portal (NIG), the sub-decree relating to the management, use and securing of data Identity (PID) and Cybercrime Bill. This year’s main theme will align with the overall theme “Journalism beleaguered by the digital”.

Estonia: the The Estonian Association of Journalists marks WPFD2022 with the hybrid discussion “In Crisis with Ethics” on media ethics, media freedom and the role of journalists in times of crisis. Presenters come from Estonia, Ukraine, Russia and Georgia.

Finland: The Union of Finnish Journalists celebrates World Press Freedom Day with a special event in Helsinki, which will host a panel discussion on what is missing in Finnish media and journalism.

France: The National Union of Journalists (SNJ-France) is organizing on May 3 at 12:30 p.m., place Ghislaine-Dupont-Claude-Verlon-Camille-Lepage in Paris (2nd arrondissement), a special ceremony for journalists who “died for information” in presence of Anthony Bellanger, IJF General Secretary and Dominique Pradalié, member of the IJF Executive Committee.

The SNJ and the IFJ are also organizing a screening of the film “Hacking Justice” and a debate on “Freedom, rehabilitation and compensation for Julian Assange” on May 3 from 6 p.m. to 10 p.m. in the auditorium of the Paris City Hall. In the presence of Cédric Villani, MP; a family member of Julian Assange; Anthony Bellanger, IFJ General Secretary; William Bourdon, lawyer; and David Dufresne, journalist and director.

Indonesia: This year’s WPFD celebration parallels Eid Al-Fitr, a holy day for most Indonesian Muslims. Therefore, the celebration of the Association of Indonesian Independent Journalists will take place after May 3. The union will organize various events in 20 cities, such as debates, radio and television shows, photo exhibitions and training for journalists on holistic violence. The highlight of the event will take place on June 6 with the launch of the report on press freedom in Indonesia.

Italy: OOn the occasion of World Press Freedom Day 2022, the Italian National Press Federation (FNSI) will be in Conselice, a small town in Emilia-Romagna which houses the Monument dedicated to the freedom of the press: a old printing press similar to the one used by the clandestine printers who during the Liberation struggle worked to inform about what was happening on the front of the National Liberation Committee. The initiative is promoted in collaboration with the Press Association of Emilia-Romagna, the Region of Emilia-Romagna, the Province of Ravenna, the Union of Municipalities of Lower Romagna, the Municipality of Conselice. Alongside the general secretary of the FNSI, Raffaele Lorusso, and the local authorities, will be present threatened reporters, such as Paolo Berizzi, president of the Observatory of freedom of the press born in Conselice last year. Since 2019, Berizzi has been forced to live under surveillance due to threats received from neo-Nazi and neo-fascist groups.

Burma: The Myanmar Journalists Association will celebrate World Press Freedom Day on May 3 at the MPC office in Yangon with a panel discussion on “real news” to further reach people and fight fake news.

Pakistan: the The Pakistan Federal Union of Journalists (PFUJ) has planned a number of programs at the level of the federation and regional unions. The following events are scheduled in the coming days as part of World Freedom Day: Seminar in Lahore, Karachi, Islamabad; Candlelight vigil in memory of martyred journalists; Gatherings at Regional Union level and memorandum to be sent to government authorities.

Sri Lanka:The Federation of Media Employees Unions (FMETU) will hold a seminar on “Press Freedom and Journalists’ Responsibility” near the International Media Centre, Gogotagama, Galle face. The Free Media Movement and the Sri Lanka Working Journalists Association jointly organized a panel discussion on “Democracy, Social Responsibility and Responsible Journalism”, particularly in light of recent developments in Sri Lanka. Journalists who wish to attend this discussion are invited with this link.

UK: The National Union of Journalists (NUJ) is hosting a month-long series of online events with speakers exploring global threats to journalism. Sessions will cover the union’s work campaigning for the safety of journalists, examine the use of spyware, the abuse of harmful legal challenges through SLAPPs and much more. Registration details will soon be available on the NUJ website. Members can attend all sessions free of charge. The Slapps event is May 10.

Uruguay: The International Federation of Journalists (IFJ), in collaboration with the Uruguayan Press Association (APU) and the International Federation of Journalists of Latin America and the Caribbean (FEPALC), will organize a round table during the World Conference on on World Press Freedom Day, which takes place on May 3. The panel will focus on the situation of media workers in the region facing digital surveillance and the need for collective organizing tools to deal with it.

How the Fed’s actions after the financial crisis worsened inequality